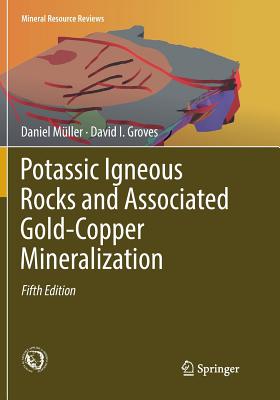 This book reviews the geochemical and petrological characteristics of potassic igneous rock complexes, and investigates the various tectonic settings in which these rocks occur. The authors provide an overview and classification of these rocks and elucidate the geochemical differences between barren and mineralized potassic igneous complexes. High-K rocks are genetically associated with a number of epithermal gold and porphyry copper-gold deposits. In recent years, there has also been growing recognition of an association of such rocks with iron-oxide copper-gold (IOCG) deposits, intrusion-related gold deposits (IRGDs) and Carlin-type gold deposits.

This fifth updated and expanded edition incorporates new data and references from world-class copper and gold deposits worldwide. It also includes the latest publications on the petrogenesis of high-K magmatism and related mineral deposits. Numerous new representative ore photographs of the mineral deposits described are also included in the new edition. As such, the book offers a valuable guide not only for academic petrologists working on alkaline rocks, but also for exploration geologists prospecting for epithermal gold and/or porphyry copper-gold deposits in modern and ancient terrains.

Daniel Müller studied geology and mineralogy at the Johannes Gutenberg University in Mainz, Germany, after serving for three years as a First Lieutenant in the German Air Force. He received his Ph.D. from the Key Centre for Strategic Mineral Deposits, University of Western Australia, and completed his postdoctoral (Habilitation) degree at the Institute for Mineralogy, TU Bergakademie Freiberg, Germany. Daniel is a highly experienced geologist, having spent over 24 years exploring for base- and precious-metal deposits with international mining companies such as Placer Dome, North Limited, Ivanhoe Mines, Citadel Resource Group, Coventry Resources, BHP Billiton and QPX Chile, in Africa, Asia, Australia, Europe, North and South America, and the Middle East. His exploration teams discovered additional resources of over 200,000 oz. of gold both at Kanowna Belle gold mine, Australia, and in the Jabal Shayban gold project, Kingdom of Saudi Arabia, respectively. He is currently based in Santiago, where he is prospecting for porphyry copper deposits in the Chilean Andes with the Target Generation Team (NDP Team) of QPX Chile.

David I. Groves received his B.Sc. Honours (1st class) and Ph.D. from the University of Tasmania. He joined the University of Western Australia (UWA) as a lecturer in 1972, and became a full professor, founder and Director of the Key Centre for Strategic Mineral Deposits (later Centre for Global Metallogeny) in 1987. Throughout his career, he has supervised over 250 graduates for B.Sc. Honours, M.Sc., or Ph.D. degrees and authored or co-authored over 500 publications in Economic Geology. He has been President of the Geological Society of Australia, SEG and SGA, and has been awarded 11 medals for his research, including both the Gold Medals of SEG and SGA for lifetime contributions to Economic Geology and the Geological Association of Canada Medal. He is a fellow of the Australian Academy of Sciences.

After retiring as Emeritus Professor, he was awarded an Honorary D.Sc. from the UWA and has consulted to the gold exploration industry and investment groups on all continents. He has also presented workshops on geological aspects of the business of exploration in Canada and the UK to brokers and investors. Recently, he has been a Visiting Professor at China University of Geosciences Beijing (CUGB), where he has lectured, mentored postgraduate students and co-authored several papers with CUGB staff and students. He has also become a novelist with his first novel "The Digital Apocalypse" published by Connor Court, Australia in 2015. He has a geological detective novel, "The Plagues Protocols", and a children's novel, "Naughty in Pink" in press with Austin Macauley Publishers, London UK, and a novel in Mandarin, "Destiny on Magic White Mountain", in press with Popular Science Press, Beijing, China.