Jaya: An Advanced Optimization Algorithm and Its Engineering Applications 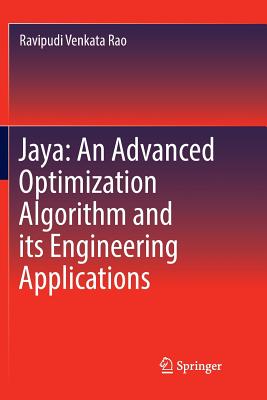 This book introduces readers to the "Jaya" algorithm, an advanced optimization technique that can be applied to many physical and engineering systems. It describes the algorithm, discusses its differences with other advanced optimization techniques, and examines the applications of versions of the algorithm in mechanical, thermal, manufacturing, electrical, computer, civil and structural engineering.

In real complex optimization problems, the number of parameters to be optimized can be very large and their influence on the goal function can be very complicated and nonlinear in character. Such problems cannot be solved using classical methods and advanced optimization methods need to be applied. The Jaya algorithm is an algorithm-specific parameter-less algorithm that builds on other advanced optimization techniques. The application of Jaya in several engineering disciplines is critically assessed and its success compared with other complex optimization techniques such as Genetic Algorithms (GA), Particle Swarm Optimization (PSO), Differential Evolution (DE), Artificial Bee Colony (ABC), and other recently developed algorithms.

Dr. R. Venkata Rao is currently working as a Professor at the Department of Mechanical Engineering, S.V. National Institute of Technology, Surat, India. He has more than 27 years of teaching and research experience, having completed his B.Tech. in 1988, M.Tech. in 1991, Ph.D. in 2002 and D.Sc. in 2017. Dr. Rao's research interests include: advanced optimization algorithms and their applications to design, thermal and manufacturing engineering, and fuzzy multiple attribute decision-making (MADM) methods and their industrial applications. He has more than 300 research papers to his credit, published in national and international journals and conference proceedings, and has received national and international awards for his research efforts. He is a reviewer for more than 80 national and international journals and serves on the editorial boards of several international journals. Apart from conducting a number of short-term training programs for faculty members and professionals on advanced engineering optimization techniques, he has handled numerous research projects including the bi-lateral projects with Austria, Russia and Slovenia. He also worked as a Visiting Professor at Cracow University of Technology, Poland in January and November 2016 and at Asian Institute of Technology, Thailand in 2008, 2010, 2015 and 2018. He has authored five books entitled "Decision Making in the Manufacturing Environment Using Graph Theory and Fuzzy Multiple Attribute Decision Making Methods (Volume 1 (2007) and Volume 2 (2013)),""Advanced Modeling and Optimization of Manufacturing Processes: International Research and Development (2010)," "Mechanical Design Optimization Using Advanced Optimization Techniques (2012)" and "Teaching-Learning-Based Optimization Algorithm and Its Engineering Applications (2016)," all of which were published by Springer Verlag, UK.