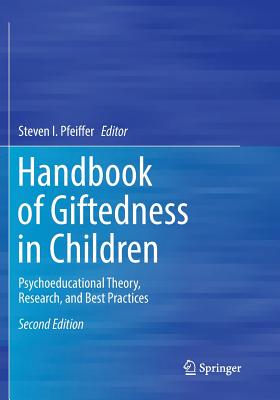 Most leaders in American society recognize that gifted children are among our most precious natural resources. Following the Soviet Union's launch of the Sputnik in the 1960s, our country focused resources on identifying and nurturing America's intellectually gifted. Less than a decade later, however, America's gifted and talented have become an almost neglected special-needs population - for a variety of socio-cultural, political, and economic reasons. Even American psychology has given little attention to the unmet and under-met needs of America's most promising youth.

The gifted population comprise roughly 5% to 20% of the general population of school-age children - depending on which definition of gifted and talented or which set of diagnostic criteria are applied. The gifted are a significant population, based on their numbers and on their potential to make a real difference in our nation's future.

The purpose of the proposed volume is to provide psychologists, graduate students, and other allied professionals who serve children with a definitive resource on how best to accomplish these three practice implications. The handbook is intended as a scholarly resource for practitioners and trainers in psychology and closely related human service fields who work with children, adolescents, and families. The handbook is also intended for graduate students specializing in the fields of school psychology, clinical child psychology, social work, mental health counseling, child psychiatry, and marriage and family therapy. Chapters will include a brief discussion of relevant theory and a cogent discussion of research, with emphasis on the application of empirical research to guide best practices. Each chapter will be written by an individual or individuals who are imminently qualified to discuss the particular topic area being addressed. Moreover, each chapter author(s) will be asked to take an empirical approach toward his or her scholarly discussion and avoid presenting only one theoretically-biased point of view. The goal is to provide the reader with a definitive and timely resource on the literature relevant to meeting the psychoeducational and psychological needs of the gifted and their families.

Steven I. Pfeiffer, Ph.D., is a Professor at Florida State University. Previously, he was a Professor at Duke University, where he served as Executive Director of the Duke University Talent Identification Program (Duke TIP). Dr. Pfeiffer is an internationally recognized expert in the gifted field. According to Alan Kaufman, Dr. Pfeiffer is "among a small group of the world's leading experts in the gifted field. He is an unusually articulate spokesperson on the varied topics that comprise the broad domain of gifted education and gifted assessment." Dr. Pfeiffer twice testified at the White House before the National Task Force on Health Care Reform. In 2012, he was a Distinguished Visiting Scholar at the National Institute of Education in Singapore. He has an active clinical practice and conducts workshops in the United States and internationally. Dr. Pfeiffer is lead author of the Gifted Rating Scales (Pearson Assessment, 2003), the most widely used rating scale in gifted identification. His most recent books include, Serving the Gifted (Routledge, 2013); Essentials of Gifted Assessment (Wiley, 2015); and The Social and Emotional Development of Gifted Children (Prufrock Press, 2015), co-edited with Maureen Neihart and Tracy Cross. He is Editor-in-Chief of the APA Handbook of Giftedness and Talent (Washington, DC: APA Books; in press).