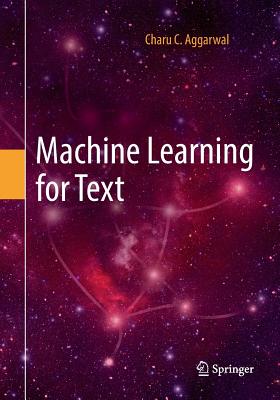 Text analytics is a field that lies on the interface of information retrieval, machine learning, and natural language processing, and this textbook carefully covers a coherently organized framework drawn from these intersecting topics. The chapters of this textbook is organized into three categories:

- Domain-sensitive mining: Chapters 8 and 9 discuss the learning methods from text when combined with different domains such as multimedia and the Web. The problem of information retrieval and Web search is also discussed in the context of its relationship with ranking and machine learning methods.

This textbook covers machine learning topics for text in detail. Since the coverage is extensive, multiple courses can be offered from the same book, depending on course level. Even though the presentation is text-centric, Chapters 3 to 7 cover machine learning algorithms that are often used indomains beyond text data. Therefore, the book can be used to offer courses not just in text analytics but also from the broader perspective of machine learning (with text as a backdrop).

This textbook targets graduate students in computer science, as well as researchers, professors, and industrial practitioners working in these related fields. This textbook is accompanied with a solution manual for classroom teaching.

Charu C. Aggarwal is a Distinguished Research Staff Member (DRSM) at the IBM T. J. Watson Research Center in Yorktown Heights, New York. He completed his undergraduate degree in Computer Science from the Indian Institute of Technology at Kanpur in 1993 and his Ph.D. from the Massachusetts Institute of Technology in 1996. He has worked extensively in the field of data mining. He has published more than 350 papers in refereed conferences and journals and authored over 80 patents. He is the author or editor of 17 books, including textbooks on data mining, recommender systems, and outlier analysis. Because of the commercial value of his patents, he has thrice been designated a Master Inventor at IBM. He is a recipient of an IBM Corporate Award (2003) for his work on bio-terrorist threat detection in data streams, a recipient of the IBM Outstanding Innovation Award (2008) for his scientific contributions to privacy technology, and a recipient of two IBM Outstanding Technical Achievement Awards (2009, 2015) for his work on data streams/high-dimensional data. He received the EDBT 2014 Test of Time Award for his work on condensation-based privacy-preserving data mining. He is also a recipient of the IEEE ICDM Research Contributions Award (2015), which is one of the two highest awards for influential research contributions in the field of data mining. He has served as the general co-chair of the IEEE Big Data Conference (2014) and as the program co-chair of the ACM CIKM Conference (2015), the IEEE ICDM Conference (2015), and the ACM KDD Conference (2016). He served as an associate editor of the IEEE Transactions on Knowledge and Data Engineering from 2004 to 2008. He is an associate editor of the IEEE Transactions on Big Data, an action editor of the Data Mining and Knowledge Discovery Journal, and an associate editor of the Knowledge and Information Systems Journal. He has served as editor-in-chief of the ACM SIGKDD Explorations (2014-2017) and is currently an editor-in-chief of the ACM Transactions on Knowledge Discovery from Data. He serves on the advisory board of the Lecture Notes on Social Networks, a publication by Springer. He has served as the vice-president of the SIAM Activity Group on Data Mining and is a member of the SIAM industry committee. He is a fellow of the SIAM, ACM, and the IEEE, for "contributions to knowledge discovery and data mining algorithms."