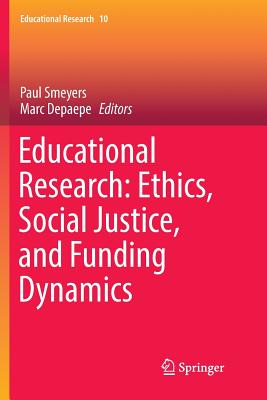 This book examines the conduct and purposes of educational research. It looks at values of researchers, at whose interests are served by the research, and the inclusion or exclusion of practitioners and subjects of research. It asks if educational research should be explicitly committed to promoting equality and inclusion, and whether that requires research to be more aware of the cultural and global contexts of research questions. It explores the ethical challenges encountered in the conduct of research and the potential ethical and social justice constraints imposed by comparative research rankings. Next, it discusses the research funding aspects of the above issues both philosophically and historically, thus examining the changing sources, patterns, and effects of educational research funding over time. Since the conduct of most educational research increasingly requires institutional and financial support, the question is whether funding shapes the content of research, and what counts as research. The book discusses if funding is a factor in the shift of efforts of researchers from pure or basic research to more applied research, and if it encourages the development of large research teams, to the detriment of individual scholars. It looks at the ownership of the content, results, and data of publicly funded research. Finally, it tries to establish whether scholars solicit funding to support research projects, or generate research projects to attract funding.

This publication, as well as the ones that are mentioned in the preliminary pages of this work, were realized by the Research Community Philosophy and History of the Discipline of Education: Purposes, Projects, and Practices of Educational Research.

Paul Smeyers is Professor at Ghent University and at KU Leuven, both in Belgium, and Honorary Professor at Stellenbosch University (South Africa). He teaches philosophy of education and methodology of the Geisteswissenschaften (Qualitative/Interpretative Research Methods). He is the author of numerous articles focusing on Wittgenstein's relevance for philosophy of education, on postmodernism, and on issues of the methodology of educational research. He is President of the International Network of Philosophers of Education and link-convenor for Network 13, Philosophy of Education, European Educational Research Association. He is the Editor of Ethics and Education (Taylor and Francis). Together with Nigel Blake, Richard Smith, and Paul Standish he co-authored three books, Thinking Again, Education in an Age of Nihilism, The Therapy of Education, and with Michael Peters and Nick Burbules Showing and Doing. With Marc Depaepe he co-edited the series Educational Research (Springer, thus far 10 books). Recent publications include a co-authored book with Richard Smith (Making Sense of Education and EducationalRresearch, Cambridge University Press, Cambridge, 2014), a collection co-edited with David Bridges, Morwenna Griffiths, and Nick Burbules (International handbook of interpretation in educational research methods, 2 vols., Springer, 2015) and a collection he edited for Springer, International Handbook of Philosophy of Education (2 volumes, to be published in 2018). His latest work focuses anew on Wittgenstein's legacy for philosophy of education. Some of that is included in the collection edited by Michael Peters and Jeff Stickney (A Companion to Wittgenstein on Education. Springer, 2017). Attention to Smeyers' contributions in this area are discussed in the Foreword (David Bakhurst), the introductory chapter (Editors), and in a separate chapter by Paul Standish of this collection.

Marc Depaepe is Professor of History of Education and History of Psychology at the KU Leuven, campus Kulak (Flanders, Belgium). Deputy Vice-Chancellor at the KU Leuven, responsible for the campuses at Kortrijk (Kulak), Bruges and Ostend between (2013-2017). Co-editor-in-chief of Paedagogica Historica, since 2005. Former Secretary (1989-1991) and Chairman (1991-1994) of the "International Standing Conference for the History of Education" (ISCHE). Former President of the "Belgian Dutch Society for the History of Education" (BNVGOO) (1998-2002) and Vice-president of the "Internationale Gesellschaft für Historische und Systematische Schulbuchforschung" (IGHSSF) in Germany (1997-2008). Member of the Board of directors of the International Academy of Education (IAE), since 2012. Published and co-published abundantly on the history of education. His selected readings, Between Educationalization and Appropriation, were published in 2012. In 2015 he was awarded a honorary doctorate at the University of Latvia in Riga.