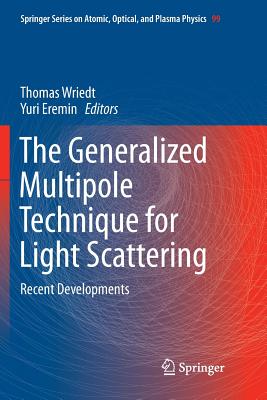 This book presents the Generalized Multipole Technique as a fast and powerful theoretical and computation tool to simulate light scattering by nonspherical particles. It also demonstrates the considerable potential of the method.

In recent years, the concept has been applied in new fields, such as simulation of electron energy loss spectroscopy and has been used to extend other methods, like the null-field method, making it more widely applicable. The authors discuss particular implementations of the GMT methods, such as the Discrete Sources Method (DSM), Multiple Multipole Program (MMP), the Method of Auxiliary Sources (MAS), the Filamentary Current Method (FCM), the Method of Fictitious Sources (MFS) and the Null-Field Method with Discrete Sources (NFM-DS). The Generalized Multipole Technique is a surface-based method to find the solution of a boundary-value problem for a given differential equation by expanding the fields in terms of fundamental or other singular solutions of this equation. The amplitudes of these fundamental solutions are determined from the boundary condition at the particle surface.

Electromagnetic and light scattering by particles or systems of particles has been the subject of intense research in various scientific and engineering fields, including astronomy, optics, meteorology, remote sensing, optical particle sizing and electromagnetics, which has led to the development of a large number of modelling methods based on the Generalized Multipole Technique for quantitative evaluation of electromagnetic scattering by particles of various shapes and compositions. The book describes these methods in detail.

Thomas Wriedt studied Electrical Engineering in Kiel and Bremen, Germany. He received his Dr.-Ing. degree in Microwave Engineering from the University of Bremen in 1986. From 1986 to 1989 he was a postdoc researcher at the University of Bremen's Department of Process Engineering, working on optical particle characterization. He has been the head of the Powder and Particle Measurement research group at the Stiftung Institut für Werkstofftechnik (IWT) (from January 2018: Leibniz-Institut für Werkstofforientierte Technologien (IWT) ), Bremen since 1989. His current research focuses on the Null-field method with Discrete Sources (NFM-DS) for simulation in optical particle characterization and generally light scattering by particles. He has authored and co-authored four books and 170 peer-reviewed papers.