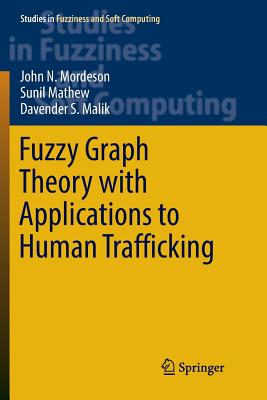 This book reports on advanced concepts in fuzzy graph theory, showing a set of tools that can be successfully applied to understanding and modeling illegal human trafficking. Building on the previous book on fuzzy graph by the same authors, which set the fundamentals for readers to understand this developing field of research, this second book gives a special emphasis to applications of the theory. For this, authors introduce new concepts, such as intuitionistic fuzzy graphs, the concept of independence and domination in fuzzy graphs, as well as directed fuzzy networks, incidence graphs and many more.

Dr. John N. Mordeson is Professor Emeritus of Mathematics at Creighton University. He received his B.S., M.S., and Ph.D. from Iowa State University. He is a Member of Phi Kappa Phi. He is a President of the Society for Mathematics of Uncertainty. He has published ﬁfteen books and two hundred journal articles. He is on the editorial board of numerous journals. He has served as an external examiner of Ph.D. candidates from India, South Africa, Bulgaria, and Pakistan. He has refereed for numerous journals and granting agencies. He is particularly interested in applying mathematics of uncertainty to combat the problem of human trafﬁcking.

Dr. Sunil Mathew is currently a Faculty Member in the Department of Mathematics, NIT Calicut, India. He has acquired his masters from St. Joseph's College Devagiri, Calicut, and Ph.D. from National Institute of Technology Calicut in the area of Fuzzy Graph Theory. He has published more than seventy-ﬁve research papers and written two books. He is a Member of several academic bodies and associations. He is editor and reviewer of several international journals. He has an experience of twenty years in teaching and research. His current research topics include fuzzy graph theory, bio-computational modeling, graph theory, fractal geometry, and chaos.

Dr. Davender S. Malik is a Professor of Mathematics at Creighton University. He received his Ph.D. from Ohio University and has published more than ﬁfty-ﬁve papers and eighteen books on abstract algebra, applied mathematics, graph theory, fuzzy automata theory and languages, fuzzy logic and its applications, programming, data structures, and discrete mathematics.