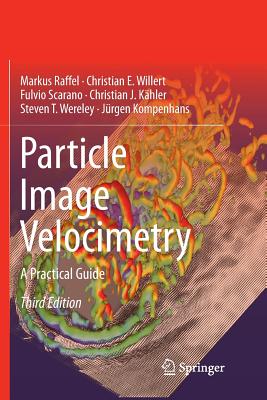 The development of Particle Image Velocimetry (PIV), a measurement technique, which allows for capturing velocity information of whole ?ow ?elds in fractions of a second, has begun in the eighties of the last century. In 1998, when this book has been published ?rstly, the PIV technique emerged from laboratories to applications in fundamental and industrial research, in par- lel to the transition from photo-graphicalto video recording techniques. Thus this book, whose objective was and is to serve as a practical guide to the PIV technique, found strong interest within the increasing group of users. The early progress made with the PIV technique might best be char- terized by the experience gained during our aerodynamic research at DLR (Deutsches Zentrum fur ] Luft- und Raumfahrt) at that time. The ?rst app- cations of PIV outside the laboratory, in wind tunnels, as performed in the mid-eighties were characterized by the following time scales: time required to set up the system and to obtain well focused photo-graphical PIV recordings was 2 to 3 days, time required to process the ?lm was 0. 5 to 1 day, time - quired to evaluate a single photo-graphicalPIV recording by means of optical evaluation methods was 24 to 48 hours. When the ?rst edition of this book was published in 1998, with electronic cameras and computers, it was pos- ble to focus on-line, to capture several recordings per second, and to evaluate a digital recording within seconds.