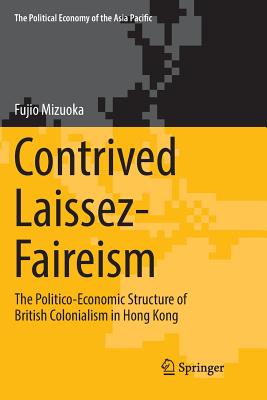 This book analyses neo-liberal economic policy in Hong Kong and its relationship to British colonial governance. Using historical, political, and economic examples, the author argues that the growth and stability experienced by Hong Kong in the post-WWII/pre-1997 era was a direct result of policies enacted by the British in an effort to maintain colonial dominance in an era of decolonization rather than the independent workings of the free market. The book works through examples of policies employed by the British in Hong Kong, such as the creation of artificial scarcity in colonial land policy, the construction of large-scale public housing and the Mass Transit Railway System, and education policy that favored competition. Challenging long-accepted narratives, this book draws a direct line between market fundamentalism and direct colonial control. As such, this book will be of interest to scholars and students of economics, political science, history, and those studying the Asia-Pacific region.

From 1979 to 1981, Mizuoka taught as a visiting lecturer at Department of Geography and Geology, Faculty of Arts, University of Hong Kong. He then moved on to the US on the Fulbright Scholarship to conduct his doctoral research at Graduate School of Geography, Clark University for the period between 1983 and 1986. He served various assistantships during his stay at Clark. After the conferment of his Ph. D., he was appointed to the associate professorship of economic geography at Faculty of Economics, Hitotsubashi University in 1987, and was promoted to a full professor in 1992. In 2007, he conducted his research as a visiting scholar at the Hong Kong University of Science and Technology, Hong Kong SAR, China, for eight months on the critical analysis of the Mass Transit Railway development there, which will consist of a chapter in the proposed book. After retirement from Hitotsubashi in 2014, he was appointed as an adjunct professor and taught economic geography and 'market and society' courses for two years until March 2016.