Many-Body Approaches at Different Scales: A Tribute to Norman H. March on the Occasion of His 90th Birthday 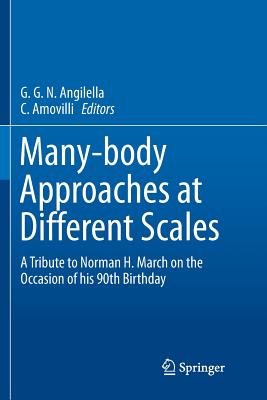 This book presents a collection of invited research and review contributions on recent advances in (mainly) theoretical condensed matter physics, theoretical chemistry, and theoretical physics. The volume celebrates the 90th birthday of N.H. March (Emeritus Professor, Oxford University, UK), a prominent figure in all of these fields. Given the broad range of interests in the research activity of Professor March, who collaborated with a number of eminent scientists in physics and chemistry, the volume embraces quite diverse topics in physics and chemistry, at various dimensions and energy scales. One thread connecting all these topics is correlation in aggregated states of matter, ranging from nuclear physics to molecules, clusters, disordered condensed phases such as the liquid state, and solid state physics, and the various phase transitions, both structural and electronic, occurring therein. A final chapter leaps to an even larger scale of matter aggregation, namely the universe and gravitation. A further no less important common thread is methodological, with the application of theoretical physics and chemistry, particularly density functional theory and statistical field theory, to both nuclear and condensed matter.

G.G.N. Angilella is Associate Professor in Condensed Matter Theory at the Department of Physics and Astronomy, University of Catania, Italy. Dr. Angilella gained an MSc in Physics from the University of Catania in 1994, and went on to complete his PhD there in 1999. In 2003 he received an award from the European High Pressure Research Group (EHPRG). He has subsequently served as Secretary and later as Chairman of EHRPG, and as a member of the Executive Committee and Secretary for the International Association for Research and Technology at High Pressure (AIRAPT). His research interests include unconventional superconductivity, high pressure physics, and graphene. He is the author of more than 100 articles in peer-reviewed journals and four books, and has acted as a reviewer for more than 70 articles published in American Physical Society journals as well as for numerous articles in other leading journals. He is editor, with N.H. March, of the international scientific journal Physics and Chemistry of Liquids (Taylor & Francis).

C. Amovilli is Associate Professor in Physical Chemistry at the Department of Chemistry and Industrial Chemistry, University of Pisa, Italy. Dr. Amovilli gained an MSc in Chemistry at the University of Pisa and Scuola Normale Superiore, Pisa, in 1984 and went on to obtain a PhD in Chemistry from the Scuola Normale Superiore, Pisa in 1987. He has subsequently been a research fellow or visiting scientist at several international research institutions and universities, including the University of Oxford, the University of Antwerp, ICTP (Trieste), and the Lorentz Institute for Theoretical Physics (University of Leiden). His research activities include the theoretical study of intermolecular forces, analytical developments within the application of density functional theory to model systems, multiconfigurational calculations in the context of valence bond and molecular orbital theories, and calculations on boron and carbon clusters. He is the author of more than 100 research articles and chapters in specialized books.