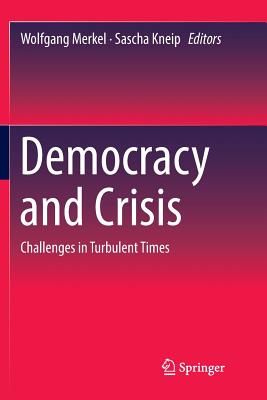 In light of the public and scholarly debates on the challenges and problems of established democracies, such as a lack of participation, declining confidence in political elites, and the deteriorating capabilities of democratic institutions, this volume discusses the question whether democracy as such is in crisis. On the basis of the shared concept of embedded democracy, it develops a range of conceptual approaches to empirically analyzing the challenges of democracy and their potential transformation into crisis phenomena.
The book is divided into three parts, the first of which highlights various aspects of political participation, such as political inequality in voting. In turn, Part II focuses on problems of political representation, while Part III assesses whether processes such as globalization, deregulation, and the withdrawal of the state from important policy areas have limited the political control and legitimacy of democratically elected governments.

Prof. Dr. Wolfgang Merkel is Director of the "Democracy and Democratisation" research program at the Social Science Research Centre Berlin (WZB) and Professor of Political Science at the Humboldt University Berlin. He is a member of a number of key bodies, including the Berlin-Brandenburg Academy of Sciences and Humanities. He is also a non-party member of the Basic Values Commission of the Executive Committee of the German Social Democratic Party (SPD). His most recent publications include Demokratie und Krise. Zum schwierigen Verhältnis zwischen Theorie und Empirie (ed., 2015); Handbuch Transformationsforschung (2015, together with Raj Kollmorgen and Hans-Jürgen Wagener); The Future of Representative Democracy (2011, together with Sonia Alonso and John Keane); Systemtransformation (2010); Social Democracy in Power. The Capacity to Reform (2008), which has been translated into German, Chinese and Vietnamese; the 2-volume Defekte Demokratie (2002, 2006); and more than 200 journal articles on such subjects as democracy and democratisation, 21st-century dictatorships, political parties, comparative public policy, the future of social democracy, welfare states and social justice.
Dr. Sascha Kneip is senior research fellow in the "Democracy and Democratization" unit at the WZB Berlin Social Science Center. His main research interest lies in the field of democratic theory, democratic legitimacy, rule of law and multi-level governance. In several publications, he has analyzed the role of Constitutional Courts in Western democracies and discussed the judiciary's impact on the quality of democracy. His most recent publications include Demokratie, Diktatur, Gerechtigkeit (2017, ed., with Aurel Croissant and Alexander Petring), "Rekonvaleszenz der Demokratie? Die Erholung bürgerlicher Freiheitsrechte im internationalen Vergleich" (2017, in: Zeitschrift für Vergleichende Politikwissenschaft; with Aiko Wagner), and "The Impact of the Federal Constitutional Court on the Consolidation and Quality of German Democracy" (2016, in: Constitutional Courts in Comparison. The U.S. Supreme Court and the Federal Constitutional Court, Rogowski/Gawron eds.).