Membrane Proteins in Aqueous Solutions: From Detergents to Amphipols 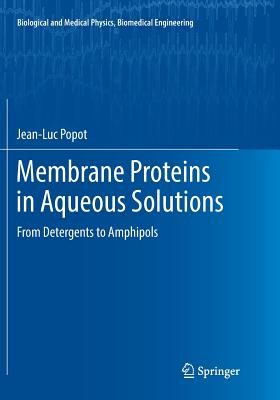 This book is the first to be entirely devoted to the challenging art of handling membrane proteins out of their natural environment, a key process in biological and pharmaceutical research, but one plagued with difficulties and pitfalls. Written by one of the foremost experts in the field, Membrane Proteins in Aqueous Solutions is accessible to any member of a membrane biology laboratory. After presenting the structure, functions, dynamics, synthesis, natural environment and lipid interactions of membrane proteins, the author discusses the principles of extracting them with detergents, the mechanisms of detergent-induced destabilization, countermeasures, and recent progress in developing detergents with weaker denaturing properties. Non-conventional alternatives to detergents, including bicelles, nanodiscs, amphipathic peptides, fluorinated surfactants and amphipols, are described, and their relative advantages and drawbacks are compared. The synthesis and solution properties of the various types of amphipols are presented, as well as the formation and properties of membrane protein/amphipol complexes and the transfer of amphipol-trapped proteins to detergents, nanodiscs, lipidic mesophases, or living cells. The final chapters of the book deal with applications: membrane protein in vitro folding and cell-free expression, solution studies, NMR, crystallography, electron microscopy, mass spectrometry, amphipol-mediated immobilization of membrane proteins, and biomedical applications.

Important features of the book include introductory sections describing foundations as well as the state-of-the-art for each of the biophysical techniques discussed, and topical tables which organize a widely dispersed literature. Boxes and annexes throughout the book explain technical aspects, and twelve detailed experimental protocols, ranging from in vitro folding of membrane proteins to single-particle electron cryomicroscopy, have been contributed by and commented on by experienced users.

Membrane Proteins in Aqueous Solutions offers a concise, accessible introduction to membrane protein biochemistry and biophysics, as well as comprehensive coverage of the properties and uses of conventional and non-conventional surfactants. It will be useful both in basic and applied research laboratories and as a teaching aid for students, instructors, researchers, and professionals within the field.

Jean-Luc Popot, born 1948, studied biology, chemistry, and biophysics in Orléans and Orsay. In 1971, he took a permanent position with the Collège de France. In J.-P. Changeux's laboratory, at the Pasteur Institute, he applied electrophysiology and biophysical and biochemical approaches to functional and structural studies of the nicotinic acetyl-cho-li-ne receptor. In 1982, he joined D.M. Engelman at Yale University as a visiting scientist. His work at Yale, which bore princi-pal-ly on refolding bacterio-rhod-opsin from dena-tu-red fragments and studying the refolded structure crystallographically, led the two of them to propose, in 1990, an influential model for the folding of α-helical membrane proteins. In 1985, he joined the laboratory of P. Joliot at the Institut de Biologie Physico-Chimique (Paris). His group car-ried out neutron diffraction and model building work on bacterio-rhod-opsin and bio-che-mical studies on Photo-sys-tem II and cytochrome b6 f. In 1996, he became Research Director at the Centre National de la Recher--che Scienti-fi-que and created his own laboratory, where the X-ray struc-tu-re of the b6 f was solved in 2003. In parallel, he pursued the development of sequence analysis approa-ches and, in collabo-ra-tion with chemists and physical chemists, designed and validated non-conventional surfact-ants aimed at facilitating membrane protein solu-tion studies, most notably amphi--pathic polymers ('amphipols') and fluorinated surfactants. He retired in 2013 and, along with his wife, splits his time between restoring an old house in Languedoc, reading, writing, hiking, photographing, cooking, and enjoying the company of kith and kin.