From Assessing to Conserving Biodiversity: Conceptual and Practical Challenges 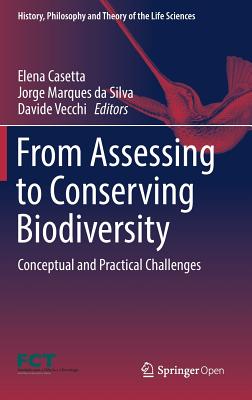 This open access book features essays written by philosophers, biologists, ecologists and conservation scientists facing the current biodiversity crisis. Despite increasing communication, accelerating policy and management responses, and notwithstanding improving ecosystem assessment and endangered species knowledge, conserving biodiversity continues to be more a concern than an accomplished task. Why is it so?The overexploitation of natural resources by our species is a frequently recognised factor, while the short-term economic interests of governments and stakeholders typically clash with the burdens that implementing conservation actions imply. But this is not the whole story. This book develops a different perspective on the problem by exploring the conceptual challenges and practical defiance posed by conserving biodiversity, namely: on the one hand, the difficulties in defining what biodiversity is and characterizing that "thing" to which the word 'biodiversity' refers to; on the other hand, the reasons why assessing biodiversity and putting in place effective conservation actions is arduous.

Elena Casetta is assistant professor at the Department of Philosophy and Educational Science at the University of Turin (Italy), where she teaches Philosophy of Nature and Philosophy of Biology. Trained in theoretical philosophy, she then specialized in philosophy of biology at the IHPST (Institut d'Histoire et de Philosophie des Sciences et des Techniques), CNRS/Paris 1/ENS Paris and at the Centre for Philosophy of Sciences of the University of Lisbon where she was the Principal Investigator of the Scientific Research and Technological Development Project "BIODECON - Which Biodiversity Definition for Biodiversity Conservation?" funded by the FCT, the Portuguese national funding agency for science, research and technology. On the philosophy of biodiversity, she edited, with Julien Delord, La biodiversité en question. Enjeux philosophiques et scientifiques, Paris, Les Éditions Materiologiques, 2014 and she wrote, with Andrea Borghini, Filosofia da biodiversidade, Lisboa, Colibri, 2018.

Jorge Marques da Silva is assistant professor at the Faculty of Science and principal investigator at the Biosystems and Integrative Sciences Institute (University of Lisbon). As a plant physiologist, Jorge is interested on the mechanisms of response to stress, chiefly on the effects of drought stress on photosynthetic metabolism. His main scientific interest is on understanding how interactions of abiotic stresses with photosynthetic metabolism impairs primary productivity. Currently, Jorge is working in highthroughput plant phenotyping, aiming to unravel environment-genetic interactions in phenotype development, with the ultimate goal of improving crop responses to climate change. Jorge also developed a parallel interest in teaching and research in Global Bioethics, mainly Environmental Ethics.

Davide Vecchi is currently FCT Research Fellow at the Department of History and Philosophy of Sciences of the Faculty of Sciences of the University of Lisbon (Portugal). Formed philosophically at Bologna University(Italy) and the LSE (UK) and biologically at the KLI (Austria) and the University of Santiago (Chile), Davide is broadly interested in theoretical issues in evolutionary biology, particularly concerning the nature of genomic change and the robustness of neutralist explanations of biological complexity. He is also interested in theoretical issues in developmental biology and, more generally, in the way contemporary biology informs philosophical debates concerning, for instance, causation, biological individuality and human nature. At the moment, his research focuses on making sense of the causal role of DNA, genes and genomes in development and evolution.