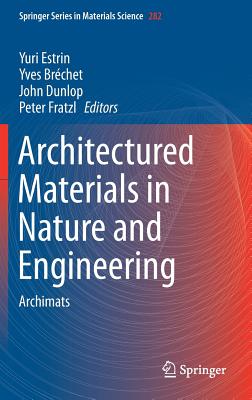 This book deals with a group of architectured materials. These are hybrid materials in which the constituents (even strongly dissimilar ones) are combined in a given topology and geometry to provide otherwise conflicting properties. The hybridization presented in the book occurs at various levels - from the molecular to the macroscopic (say, sub-centimeter) ones. This monograph represents a collection of programmatic chapters, defining archimats and summarizing the results obtained by using the geometry-inspired materials design.

The area of architectured or geometry-inspired materials has reached a certain level of maturity and visibility for a comprehensive presentation in book form. It is written by a group of authors who are active researchers working on various aspects of architectured materials. Through its 14 chapters, the book provides definitions and descriptions of the archetypes of architectured materials and addresses the various techniques in which they can be designed, optimized, and manufactured. It covers a broad realm of archimats, from the ones occurring in nature to those that have been engineered, and discusses a range of their possible applications. The book provides inspiring and scientifically profound, yet entertaining, reading for the materials science community and beyond.

Yuri Estrin: Professor Yuri Estrin is an Honorary Professorial Fellow at Monash University in Melbourne, Australia. His research interests include the mechanical properties of metals and alloys, particularly ultrafine grained ones. A further area central to his research is geometry-inspired design of novel materials. Prof. Estrin has authored over 500 peer-reviewed papers and received international recognition in the form of numerous awards, including an Alexander von Humboldt Award, an honorary doctorate from the Russian Academy of Sciences, an International Helmholtz Fellow Award, and a Thomson Reuters Citation Award. He is a Fellow of the Australian Academy of Sciences.
Yves Brechet: Professor Yves Brechet received his PhD degree at the Institut Polytechnique National (INP) in Grenoble, France. His main research interests are in physical and mechanical metallurgy, as well as materials science of biological systems. He is currently a Professor of Materials Science at the INP, an Adjunct Professor at McMaster University, Canada and a Senior Research Professor at the Institut Universitaire de France. He is also the High Commissioner for Atomic Energy (France) and a member of the French Académie des Sciences (Physics), the European Academy of Sciences (EAS-Materials Science), and Academia Europea. Dr John Dunlop: Professor John Dunlop received his PhD degree from the Institut Polytechnique National (INP), Grenoble, France. He previously worked at the Max Planck Institute of Colloids and Interfaces, where he led the research group "Biomimetic Actuation and Tissue Growth." He is currently a Professor of Chemistry and Physics of Materials at the University of Salzburg, Austria. His research focuses on understanding the basic physics that determine how biological and synthetic materials change shape in response to processes such as growth or swelling.
Peter Fratzl: Peter Fratzl is Director of the Max Planck Institute of Colloids and Interfaces in Potsdam, Germany, where he heads the Department of Biomaterials. He received an engineering degree from the Ecole Polytechnique in Paris, France, and a doctorate in Physics from the University of Vienna, Austria. In addition, he is an honorary professor at Humboldt University Berlin and at Potsdam University. He is currently pursuing interdisciplinary research between materials science and other fields including biology, medicine, design and the cultural sciences, and is particularly interested in the hierarchical structure and mechanical behavior of biological and bio-inspired materials.