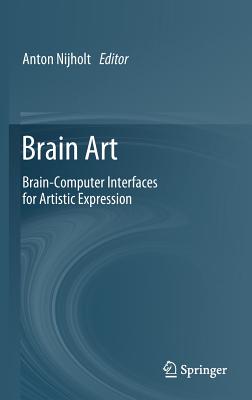 This is the first book on brain-computer interfaces (BCI) that aims to explain how these BCI interfaces can be used for artistic goals. Devices that measure changes in brain activity in various regions of our brain are available and they make it possible to investigate how brain activity is related to experiencing and creating art. Brain activity can also be monitored in order to find out about the affective state of a performer or bystander and use this knowledge to create or adapt an interactive multi-sensorial (audio, visual, tactile) piece of art. Making use of the measured affective state is just one of the possible ways to use BCI for artistic expression.

We can also stimulate brain activity. It can be evoked externally by exposing our brain to external events, whether they are visual, auditory, or tactile. Knowing about the stimuli and the effect on the brain makes it possible to translate such external stimuli to decisions and commands that help to design, implement, or adapt an artistic performance, or interactive installation. Stimulating brain activity can also be done internally. Brain activity can be voluntarily manipulated and changes can be translated into computer commands to realize an artistic vision.

His main research interests are entertainment computing, multimodal interaction, affective computing, and brain-computer interfacing. He has hundreds of scientific publications, including (edited) books on the history of computing, language processing, and brain-computer interfacing. Recently he edited the books: "Playful User Interfaces", "More Playful User Interfaces", "Entertaining the Whole World", and "Playable Cities", all with Springer. He has been a guest-editor for Journal on Multimodal User Interfaces, International Journal of Arts and Technology, Entertainment Computing, International Journal of Creative Interfaces and Computer Graphics (IJCICG) and the Brain-Computer Interfaces journal. Together with Chang S. Nam and Fabien Lotte he was editor of the "Brain-Computer Interfaces Handbook: Technological and Theoretical Advances" (Taylor & Francis, 2018).

Professor Nijholt is also Specialty Chief Editor of Frontiers in Human-Media Interaction and (associate) editor of several other journals. He has also served as Program Chair and General Chair for the main international conferences on affective computing, multimodal interaction, virtual agents, and entertainment computing.