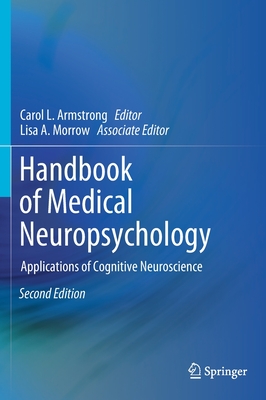 This ambitious and important second edition of the Handbook of Medical Neuropsychology takes an in-depth approach to the medical conditions and methods of neurorehabilitation. Comprehensive in scope and highly detailed in its coverage, the second edition, like the first, characterizes the effects of disease and the impact of interventions in the current state of advanced medicine at a level appropriate both for researchers and for clinicians. Featuring the most up-to-date information and quantitative research on cognitive neuroscience of autism, HIV/AIDS, cancer, head injury, respiratory diseases, endocrine diseases, early birth injury, dementia, and other disorders, the book handles theory, historical background, practical considerations, and controversial areas with evidence based disease indicators, clinical expertise, and real-world insight. It seeks to critique diagnostic and assessment tools specific to disorders. The new chapters in this inclusive second edition reflect the changes in prominent problems found in the clinic and provide worthy insights for research investigation in their review of:

The Handbook of Medical Neuropsychology, 2nd Edition continues to be an essential resource for the neuropsychology clinician, researcher, practitioner or graduate student. It will be stimulating and relevant reading for years to come.

Carol L. Armstrong is a neuropsychologist with the University of Pennsylvania School of Medicine who conducts cognitive neuroscience research and engages in clinical practice; her work began with neurological disorders and diseases such as Alzheimer's dementia, cerebrovascular dementia, multiple sclerosis, head injury, and other diseases and disorders that led to a particular interest in environmental risks for brain injury. With funding from the National Institutes of Health and other agencies, her research evolved into a programmatic focus on neuro-oncology and the effects on the brain from therapeutic irradiation. She has published longitudinal findings on the cognitive and neuroimaging outcomes associated with neural responses to radiotherapy, and discerned them from brain tumor effects. Her work identified the special vulnerability of specific memory systems to injury from radiotherapy, and differentiated them from attention, working memory, and executive functions. Current radiotherapy techniques now protect the hippocampus to the greatest degree possible as part of radiotherapy plans. The pediatric response to therapeutic irradiation shows a different temporal course of post-treatment change in cognition, suggesting a different hippocampal response than that found in adults, and showing that cognition might be a biomarker of radiation effects. The cerebellum is frequently part of the treatment fields for children, and should also be protected as both the hippocampus and cerebellum share the neural mechanisms that make them vulnerable to irradiation.

Dr. Armstrong's long-term interests are the study of memory, attention, and emotion, as well as the cognitive processes affected by white matter disease or injury, and normal effects on white matter as we age. Investigations have focused on resource-limited memory and attention processes, and on the structural distribution of the white matter measure in normal and injured brains. Recent investigations include the comparison of photon versus proton radiotherapy effects on cognition and neuroimaging.

Lisa A. Morrow PhD., retired Associate Professor Emerita, Department of Psychiatry, Western Psychiatric Institute and Clinic, University of Pittsburgh School of Medicine. Dr. Morrow is a retired tenured professor and board-certified neuropsychologist with over 35 years experience in clinical and epidemiological research. Her NIH-funded research focused on neurobehavioral and psychiatric functioning in adults with cognitive deficits resulting from various medical disorders, exposure to neurotoxins, and cognitive decline in older individuals with dementia due to Alzheimer's disease, stroke, and Parkinson's disease. Dr. Morrow helped to develop and publish several normative studies of neuropsychological tests and test batteries, including a computer-based assessment of mild memory impairment to aid in the early detection of mental status changes in the elderly. Dr. Morrow has published over 70 peer-reviewed papers and chapters in major medical and psychological journals, and this research has been acknowledged from a number of professional and neuropsychological organizations.