New and Old Routes of Portuguese Emigration: Uncertain Futures at the Periphery of Europe 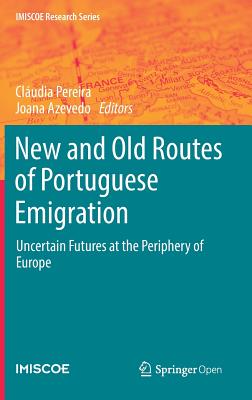 This open access book offers a comparative overview on Portuguese emigration in Europe and outside the EU in times of recession. It looks at Portuguese emigrants who, after the crisis of 2008, moved both intra-EU, such as UK, France, Switzerland, Germany and Spain, but also into countries with historical links, such as the USA and Canada, and to Portuguese speaking countries such as Brazil, Angola and Mozambique, as well as the processes of return. In addition to the dynamics of movement, the book provides an in-depth analysis of the heterogeneity of this emigration. It deepens the multifaceted identities concerning social and professional pathways among highly skilled and less skilled emigrants. The labour market continues to be the main regulatory force of Portuguese emigration, which helps to explain the outflow and the processes of settlement and return. Nonetheless, this book demonstrates that non-economic factors have likewise been of great importance in the decision to emigrate. As such this book will be a valuable read to policy makers, students and scholars in migration.

Cláudia Pereira is a research fellow and invited assistant professor at ISCTE-University Institute of Lisbon (IUL), integrated at the Centre for Research and Studies in Sociology (CIES-IUL). Pereira is the executive coordinator of the Portuguese Emigration Observatory (Observatório da Emigração) (OEm), Portugal. She holds a licenciate degree and Ph.D. in Anthropology from ISCTE, IUL. She and the OEm team are responsible for the Yearly Report on Portuguese Emigrants produced for the Ministry of Foreign Affairs and analysed in Parliament. Since 2012 she has been the principal researcher on a project funded by the national Foundation for Science and Technology (FCT) on the financial crisis and skilled Portuguese migrants in England. She co-coordinates an academic network of migration researchers, Rede Migra. She has also been invited as an expert to advise on capacity-building projects for the International Centre for Migration Policy Development (ICMPD) funded by the European Commission (EC). Previously she conducted ethnographic research in India for a total of two years among Catholics and Hindus, investigating the meaning of caste and tribe in the 21st century. Collaborative research with governmental and non-governmental organizations and the dissemination of knowledge on migration have been her top priorities. She published the book Vidas Partidas. Enfermeiros Portugueses no Estrangeiro (Divided Lives. Portuguese Nurses Abroad) in 2015. Her current research interests are Portuguese emigration, immigration, migration networks, the migration of nurses and skilled migrants.

Joana Azevedo is assistant professor at the Department of Sociology, School of Sociology and Public Policy, University Institute of Lisbon (ISCTE-IUL) and integrated research fellow at the Centre for Research and Studies in Sociology (CIES-IUL). She holds a PhD in Social Theory and Research from La Sapienza University in Rome (2007), a postgraduate diploma in Data Analysis in Social Sciences (2010) and a licenciate degree in Sociology (2001) from the ISCTE-IUL. She is currently a member of the Observatories of Emigration (OEm) and Communication (OberCom), and co-coordinates the interdisciplinary academic network Rede Migra. She is a member of the national evaluation panel for research funding through AMIF (Asylum, Migration and Integration Fund of the EU). She coordinated the research project "Portuguese Emigrants' Political Participation and Citizenship" (CIES-IUL/Emigration Observatory); "Highly skilled Portuguese Emigration in the European Context" (funded by the national science foundation, FCT), and, as a team member, "REMIGR. Back to the future: new emigration and links to Portuguese society" (funded by FCT). Among her publications are "Contextual reasons for emigrants' electoral participation in home country elections: the Portuguese case", Journal of Contemporary European Studies, 2017; Regresso Ao Futuro: A Nova Emigração e a Sociedade Portuguesa (Back to the Future: new emigration and Portuguese society, 2016, Gradiva); and "Regresso e circulação de emigrantes portugueses no início do século XXI (Return and circulation of Portuguese emigrants at the beginning of the 21st century)", Sociologia, Problemas e Práticas, 2016. Her areas of interest are the sociology of migration, Portuguese immigration and emigration, ethnic and religious diversity, skilled migration, political participation, and migration policies.