Archaeology of Uplands of a Mediterranean Island: The Madonie Mountain Range in Sicily 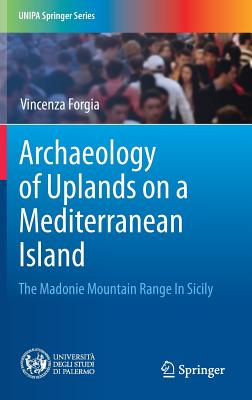 This book presents archaeological research conducted within the Highlands of Sicily. Results of an archaeological survey in the Madonie mountain range, in northern Sicily, supported by a chronological and cultural grid, drawn by the excavation of Vallone Inferno, deal with complex and fascinating problems of uplands and mountainous landscape. Settlement patterns, between the Late Pleistocene and the Medieval era, are investigated through the support of spatial analyses. A diversified use of the mountain is currently attested by this research, according to the different prehistoric and historical times.

This work is innovative for the Mediterranean area, where there are no similar examples of such extensive territorial research in a mountainous context. The research has been focused on particular aspects of ancient peopling: economic and social issues, human-environment interactions and the long term interest in the mountain range.

Vincenza Forgia is an archaeologist specialized in prehistoric studies and expert of Ancient Topography and Landscape Archeology. After graduating in Ancient Topography at the University of Palermo, she achieved her specialization in Prehistoric Archaeology at the University of Rome "La Sapienza" and obtained her PhD in Cultural Heritage Knowledge and Valorization at the Second University of Naples. Since the first years of academic formation, she has taken part in several Italian and international research activities (for example the excavation campaigns at Grotta Sant'Angelo di Saracena and Mangiapane di Scurati, in Italy, at Atapuerca, Trinchera Dolina, and Mirador in Spain or at Mesolithic researches on the field in Finland), having developed a wide range of interests in the Prehistory and Landscape Archeology of Europe and the Mediterranean area.
After a period of formation at University Rovira i Virgili of Tarragona and IPHES, she enhanced her skills in use wear analysis of stone tools and started a collaboration with different interdisciplinary research groups, engaged in archaeological Italian missions. Her scientific work, mainly focused on Neolithic times and the origin and development of production economy in the Mediterranean area, has been published in relevant journals (Quaternary International, CR Palevol). Trekking and caving interests (as an active member of Club Alpino Italiano), together with her scientific formation, contributed to the ideation of the archaeological research line on the Highlands of the Mediterranean area. Currently Vincenza Forgia coordinates (for the Department Culture e Società of the Università di Palermo) the second step of the research project on the Madonie mountains: HUMAnS (Human Upland Mobility in Ancient Sicily).