Reflections on the Foundations of Mathematics: Univalent Foundations, Set Theory and General Thoughts 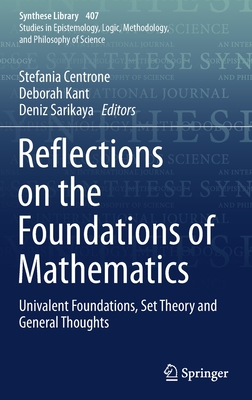 This edited work presents contemporary mathematical practice in the foundational mathematical theories, in particular set theory and the univalent foundations. It shares the work of significant scholars across the disciplines of mathematics, philosophy and computer science. Readers will discover systematic thought on criteria for a suitable foundation in mathematics and philosophical reflections around the mathematical perspectives.

The volume is divided into three sections, the first two of which focus on the two most prominent candidate theories for a foundation of mathematics. Readers may trace current research in set theory, which has widely been assumed to serve as a framework for foundational issues, as well as new material elaborating on the univalent foundations, considering an approach based on homotopy type theory (HoTT). The third section then builds on this and is centred on philosophical questions connected to the foundations of mathematics. Here, the authors contribute to discussions on foundational criteria with more general thoughts on the foundations of mathematics which are not connected to particular theories.

This book shares the work of some of the most important scholars in the fields of set theory (S. Friedman), non-classical logic (G. Priest) and the philosophy of mathematics (P. Maddy). The reader will become aware of the advantages of each theory and objections to it as a foundation, following the latest and best work across the disciplines and it is therefore a valuable read for anyone working on the foundations of mathematics or in the philosophy of mathematics.

Stefania Centrone is currently Privatdozentin at the University of Hamburg and was deputy Professor of Theoretical Philosophy at the Georg-August-Universität Göttingen. In 2012 she was awarded a DFG-Eigene Stelle for the project Bolzanos und Husserls Weiterentwicklung von Leibnizens Ideen zur Mathesis Universalis at the Carl-von-Ossietzky University of Oldenburg. She is author/editor, among others, of the volume Logic and philosophy of Mathematics in the Early Husserl (Springer 2010) and Studien zu Bolzano (Academia Verlag 2015).
Deborah Kant studied mathematics at Free University and Humboldt University in Berlin, and specialized in set theory and logic. At the DMV Students' Conference 2015 in Hamburg, her talk about her master's thesis "Cardinal Sequences in ZFC" was being awarded. Since 2015, she is a PhD student at the Humboldt University Berlin under the supervision of Karl-Georg Niebergall with a project on naturalness in set theory.