Nanocosmetics: From Ideas to Products 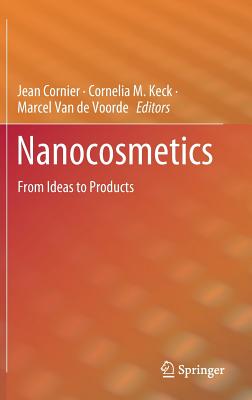 This book addresses the application of nanotechnology to cosmetics. Edited by three respected experts in the field, the book begins with a general overview of the science behind cosmetics and skin care today, and of the status quo of nanotechnology in cosmetics. Subsequent chapters provide detailed information on the different nanoparticles currently used in cosmetics; the production and characterization of nanoparticles and nanocosmetics; and regulatory, safety and commercialization aspects. Given its scope, the book offers an indispensable guide for scientists in academia and industry, technicians and students, as well as a useful resource for decision-makers in the field and consumer organizations.

Chapter 6 of this book is available open access under a CC BY 4.0 licence at link.springer.com.

Jean Cornier is presently a consultant to several companies and R&D organisations in the areas of life science, new technologies and business development. Based in Munich, Germany, he obtained his state diploma "Doctor of Pharmacy" - Pharm. D. - from the University of Caen, France, and an MSc degree in Pharmaceutical Medicine from the University of Duisburg-Essen, Germany. Since 1986 he has worked in the space industry as an expert on Materials and Life Science research and projects, and participated in commercialization initiatives supported by the European and German space agencies, as well as several EU-funded projects on biotechnology and civil security research. He was involved in the first skin research project in space, and is the co-editor of a book on nanopharmacy (Pharmaceutical Nanotechnology: Innovation and Production (2017)).

Cornelia M. Keck is a pharmacist and obtained her PhD from the Freie Universität (FU) in Berlin in 2006. In 2009 she was appointed as Adjunct Professor for Pharmaceutical and Nutritional Nanotechnology at the University Putra Malaysia (UPM), and in 2011 she completed her postdoctoral degree (Habilitation) at the Freie Universität Berlin and was appointed as a Professor for Pharmacology and Pharmaceutics at the University of Applied Sciences Kaiserslautern. Since 2016 she has been a Professor of Pharmaceutics and Biopharmaceutics at the Philipps University Marburg. Her chief field of research is the development and characterization of innovative nanocarriers for improved delivery of poorly soluble actives for healthcare and cosmetics. Prof. Keck is Vice-Chair of the "Dermocosmetics" unit at the German Society of Dermopharmacy, an active member of many pharmaceutical societies, and a member of the Committee for Cosmetics at the Federal Institute for Risk Assessment (BfR).

Marcel van de Voorde has 40 years experience at European research organizations, including CERN (Geneva), European Commission Research (Brussels), and 10 years working at the Max Planck Institute in Stuttgart, Germany. For many years, he was involved in research and research strategies, policy and management, especially in European research institutions. He is currently a Professor at the University of Technology in Delft, the Netherlands, and holds a doctor honoris causa and various honorary professorships. He is a Senator of the European Academy for Sciences and Arts in Salzburg, a Fellow of the World Academy for Sciences, and a member of the Science Council of the French Senate and National Assembly. He is a Fellow of various scientific societies and has been decorated for European merits by the King of Belgium. He has authored numerous scientific and technical publications and co-edited several books in the fields of nanoscience and nanotechnology.