The Morality of Weapons Research: Why It Is Wrong to Design Weapons 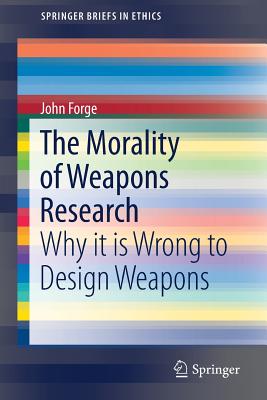 This book addresses the morality of engaging in weapons research, a topic that has been neglected but which is extremely important. It is argued that this activity is both morally wrong and morally unjustifiable, and this implies that moral persons should not engage in it. The argument is not based on any pacifist assumptions: it is not assumed that neither individuals nor states should not defend themselves. What is wrong with weapons research is that it is the first step in the production of weapons, weapons are the means to harm, and harming without justification is always wrong. Those who study science, for instance those who are interested in the responsibilities of the scientist, are given a new perspective, while those who are practicing scientists will realize that they should not consider working to design new or improved weapons systems. This book is of interest to students and researchers working in ethics and technology, philosophy of technology, military ethics, and history of technology.

John Forge attended the universities of Oxford, Cornell and University College London and obtained degrees in science and philosophy. His academic career has been spent in Departments of History and Philosophy of Science and Science and Technology Studies in Australia, although Forge has had fellowships at a number of (overseas) universities, including the Center for Philosophy of Science in Pittsburgh. For the last twenty years Forge's research has focussed on issues of science and responsibility, and especially the morality of weapons research. His The Responsible Scientist (Pittsburgh 2008) received a number of awards, including the Eureka Prize for Research Ethics. Designed to Kill: The Case Against Weapons Research (Springer 2013) is a comprehensive account of the morality of weapons research.