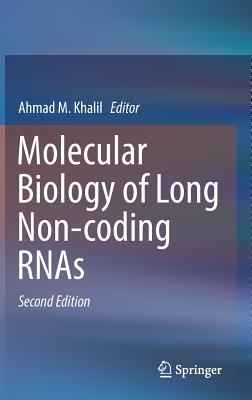 This second edition shows how long non-coding RNAs (lnc)RNAs have emerged as a new paradigm in epigenetic regulation of the genome. Thousands of lncRNAs have been identified and observed in a wide range of organisms. Unlike mRNA, lncRNA have no protein-coding capacity. So, while their function is not entirely clear, they may serve as key organizers of protein complexes that allow for higher order regulatory events. Advances in the field also include better characterization of human long non-coding RNAs, novel insights into their roles in human development and disease, their diverse mechanisms of action and novel technologies to study them.

Ahmad Khalil earned his PhD at the University of Florida School of Medicine where he discovered key epigenetic mechanisms that regulate gene expression during mammalian meiosis. Subsequently, he joined the Scripps Research Institute as a postdoctoral fellow (2006-2008) and studied the role of long non-coding RNAs in neurological disorders. In 2008, Dr Khalil moved to Harvard Medical School and the Broad Institute where he played a key role in discovering long intergenic non-coding (linc)RNAs in human cells, and demonstrated that lincRNAs play critical roles in epigenetic regulation of gene expression. In 2010, Dr Khalil joined the faculty at CWRU and his lab continues to study the role of lincRNAs in human health and disease.