Congestion Control for 6lowpan Wireless Sensor Networks: Toward the Internet of Things 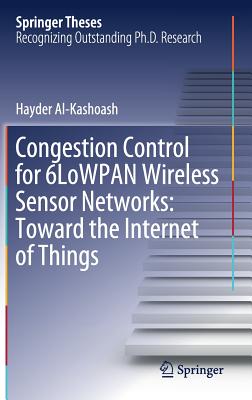 The Internet of Things (IoT) is the next big challenge for the research community. The IPv6 over low power wireless personal area network (6LoWPAN) protocol stack is considered a key part of the IoT. In 6LoWPAN networks, heavy network traffic causes congestion which significantly degrades network performance and impacts on quality of service aspects. This book presents a concrete, solid and logically ordered work on congestion control for 6LoWPAN networks as a step toward successful implementation of the IoT and supporting the IoT application requirements.

Dr Hayder Al-Kashoash is a Lecturer at Southern Technical University (STU), Basra, Iraq. He received his Bachelor degree and Master degree in Computer Engineering from University of Basra, Iraq and his PhD degree in Electronic and Electrical Engineering from The University of Leeds, UK. He received The FW Carter Prize for writing the best doctoral thesis of the year 2017-2018 in the School of Electronic and Electrical Engineering, The University of Leeds, UK. He was awarded the Iraqi Prime Minister Office Scholarship to pursue the PhD degree. Throughout his undergraduate degree, he graduated first in his school and third in his Faculty and was also the recipient of first student award in his faculty of the year 2006-2007. He has authored more than 11 journal and conference papers and reviewed more than 10 journal papers. His current research interests include congestion control and resource management in WSNs, 6LoWPAN, and LPWAN by utilizing game theory and optimization theory.