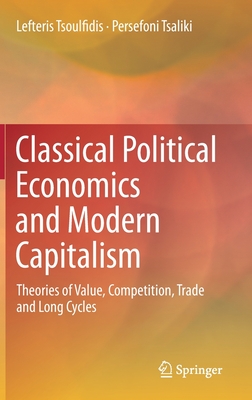 This book promotes an in-depth understanding of the key mechanisms that govern the functioning of capitalist economies, pursuing a Classical Political Economics approach to do so. It explores central theoretical issues addressed by the classical economists Smith and Ricardo, as well as Marx, while also operationalizing more recent theoretical developments inspired by the works of Sraffa and other modern classical economists, using actual data from major economies.

On the basis of this approach, the book subsequently provides alternative explanations for various microeconomic issues such as the determination of equilibrium prices and their movement induced by changes in income distribution; the dynamics of competition of firms within and between industries; the law of tendential equalization of interindustry profit rates; and international exchanges and transfers of value; as well as macroeconomic issues concerning capital accumulation and cyclical economic growth.

Given its scope, the book will benefit all researchers, students, and policymakers seeking new explanations for observed phenomena and interested in the mechanisms that give rise to surface economic categories, such as prices, profits, the unemployment rate, interest rates, and long economic cycles.

Lefteris Tsoulfidis holds a PhD and an M.A. in economics from the New School of Social Research, and a B.A. in Economics from the University of Macedonia. He worked for many years in universities in New York including Hofstra University and College of New Rochelle before joining the Department of Economics of the University of Macedonia in Thessaloniki, where he teaches courses in the History of Economic Thought, Economic History, Political Economy, Mathematical Economics and Macroeconomics.
He is the author of Competing Schools of Economic Thought and co-author of the Modern Classical Economics and Reality, both published by Springer-Verlag. He is the co-editor of the international journal Bulletin of Political Economy and Director of the Laboratory of the Economic and Social Research of the Department of Economics.
His research has been published in many scientific journals on theoretical and empirical issues related to actual competition, the theory of value and distribution, international economics and economic growth and crises.

Persefoni Tsaliki is Professor at the School of Economics, Aristotle University of Thessaloniki (Greece), which she joined in 2003. Previously, she taught in universities in New York including New York University and Yeshiva University and City Liberal Studies (Sheffield University, UK) in Thessaloniki.

She has a B.A. in Economics from the Aristotle University of Thessaloniki and an M.A. from the New School for Social Research, New York. She carried her doctoral research at the Department of Economics, New School of Social Research, New York on the Sources of Economic Growth in Greece which later was published as a book titled The Greek Economy: Sources of Economic Growth the Postwar Era, Praeger (1991).

She is the Director of the Political Economy Research Group, at the School of Economics of the Aristotle University of Thessaloniki.

Her main research interests and teaching are in the fields of Political Economy, Profitability, Accumulation, International Trade and Growth. She has published as author/co-author several books and articles in major refereed journals in Political Economy.