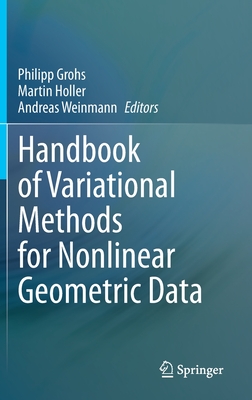 This book covers different, current research directions in the context of variational methods for non-linear geometric data. Each chapter is authored by leading experts in the respective discipline and provides an introduction, an overview and a description of the current state of the art.

Non-linear geometric data arises in various applications in science and engineering. Examples of nonlinear data spaces are diverse and include, for instance, nonlinear spaces of matrices, spaces of curves, shapes as well as manifolds of probability measures. Applications can be found in biology, medicine, product engineering, geography and computer vision for instance.

As a result, and since such methods involve various branches of mathematics, there is a plethora of different, recent approaches dealing with different aspects of variational methods for nonlinear geometric data. Research results are rather scattered and appear in journals of different mathematical communities.

The main purpose of the book is to account for that by providing, for the first time, a comprehensive collection of different research directions and existing approaches in this context. It is organized in a way that leading researchers from the different fields provide an introductory overview of recent research directions in their respective discipline. As such, the book is a unique reference work for both newcomers in the field of variational methods for non-linear geometric data, as well as for established experts that aim at to exploit new research directions or collaborations.

Chapter 9 of this book is available open access under a CC BY 4.0 license at link.springer.com.

Prof. Dr. Philipp Grohs was born on July 7, 1981 in Austria and has been a professor at the University of Vienna since 2016. In 2019, he also became a group leader at RICAM, the Johann Radon Institute for Computational and Applied Mathematics in the Austrian Academy of Sciences in Linz. After studying, completing his doctorate and working as a postdoc at TU Wien, Grohs transferred to King Abdullah University of Science and Technology in Thuwal, Saudi Arabia, and then to ETH Zürich, Switzerland, where he was an assistant professor from 2011 to 2016. Grohs was awarded the ETH Zurich Latsis Prize in 2014. In 2020 he was selected for an Alexander-von-Humboldt-Professorship award, the highest endowed research prize in Germany. He is a member of the board of the Austrian Mathematical Society, a member of IEEE Information Theory Society and on the editorial boards of various specialist journals.
Martin Holler was born on May 21, 1986 in Austria. He received his MSc (2010) and his PhD (2013) with a "promotio sub auspiciis praesidentis rei publicae" in Mathematics from the University of Graz. After research stays at the University of Cambridge, UK, and the Ecole Polytechnique, Paris, he currently holds a University Assistant position at the Institute of Mathematics and Scientific Computing of the University of Graz. His research interests include inverse problems and mathematical image processing, in particular the development and analysis of mathematical models in this context as well as applications in biomedical imaging, image compression and beyond.
Andreas Weinmann was born on July 18, 1979 in Augsburg, Germany. He studied mathematics with minor in computer science at TU Munich, and received his Diploma degree in mathematics and computer science from TU Munich in 2006 (with highest distinction). He was assistant at the Institute of Geometry, TU Graz. He obtained his Ph.D. degree from TU Graz in 2010 (with highest distinction). Then he worked as a researcher at Helmholtz Center Munich and TU Munich. Since 2015 he holds a position as Professor of Mathematics and Image Processing at Hochschule Darmstadt. He received his habilitation in 2018 from University Osnabruck. Andreas's research interests include applied analysis, in particular variational methods, nonlinear geometric data spaces, inverse problems as well as computer vision, signal and image processing and imaging applications, in particular Magnetic Particle Imaging.