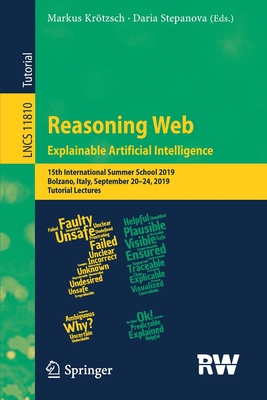 This volume contains lecture notes of the 15th Reasoning Web Summer School (RW 2019), held in Bolzano, Italy, in September 2019.
The research areas of Semantic Web, Linked Data, and Knowledge Graphs have recently received a lot of attention in academia and industry. Since its inception in 2001, the Semantic Web has aimed at enriching the existing Web with meta-data and processing methods, so as to provide Web-based systems with intelligent capabilities such as context awareness and decision support. The Semantic Web vision has been driving many community efforts which have invested a lot of resources in developing vocabularies and ontologies for annotating their resources semantically. Besides ontologies, rules have long been a central part of the Semantic Web framework and are available as one of its fundamental representation tools, with logic serving as a unifying foundation. Linked Data is a related research area which studies how one can make RDF data available on the Web and interconnect it with other data with the aim of increasing its value for everybody. Knowledge Graphs have been shown useful not only for Web search (as demonstrated by Google, Bing, etc.) but also in many application domains.

Markus Krötzsch is a full professor at the Faculty of Computer Science of TU Dresden, where he is holding the chair for Knowledge-Based Systems. He obtained his Ph.D. at Karlsruhe Institute of Technology (KIT) in 2010, and thereafter worked as a researcher and departmental lecturer at the Department of Computer Science of the University of Oxford until October 2013.

Daria Stepanova is currently a research scientist at Bosch Center for Artificial Intelligence. Prior to that she was a senior researcher heading a group in Semantic Data at Max Planck Institute for Informatics. She obtained her PhD in Computational Logic from Vienna University of Technology in 2015.