Plane Answers to Complex Questions: The Theory of Linear Models 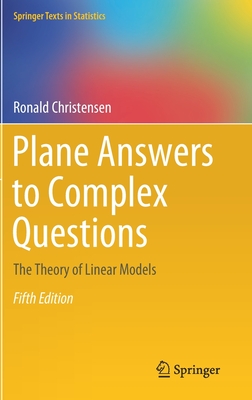 This textbook provides a wide-ranging introduction to the use and theory of linear models for analyzing data. The author's emphasis is on providing a unified treatment of linear models, including analysis of variance models and regression models, based on projections, orthogonality, and other vector space ideas. Every chapter comes with numerous exercises and examples that make it ideal for a graduate-level course. All of the standard topics are covered in depth: ANOVA, estimation including Bayesian estimation, hypothesis testing, multiple comparisons, regression analysis, and experimental design models. In addition, the book covers topics that are not usually treated at this level, but which are important in their own right: balanced incomplete block designs, testing for lack of fit, testing for independence, models with singular covariance matrices, variance component estimation, best linear and best linear unbiased prediction, collinearity, and variable selection. This new edition includes a more extensive discussion of best prediction and associated ideas of R2, as well as new sections on inner products and perpendicular projections for more general spaces and Milliken and Graybill's generalization of Tukey's one degree of freedom for nonadditivity test.

Ronald Christensen is a Professor of Statistics at the University of New Mexico, Fellow of the American Statistical Association (ASA) and the Institute of Mathematical Statistics, former Chair of the ASA Section on Bayesian Statistical Science and former Editor of The American Statistician. His book publications include Advanced Linear Modeling (Springer, new edition forthcoming), Log-Linear Models and Logistic Regression (Springer 1997), Analysis of Variance, Design, and Regression (1996, 2016), and Bayesian Ideas and Data Analysis (2010, with Johnson, Branscum and Hanson).