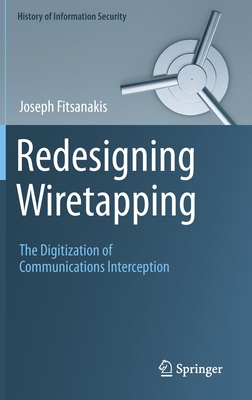 This book tells the story of government-sponsored wiretapping in Britain and the United States from the rise of telephony in the 1870s until the terrorist attacks of 9/11.

It pays particular attention to the 1990s, which marked one of the most dramatic turns in the history of telecommunications interception. During that time, fiber optic and satellite networks rapidly replaced the copper-based analogue telephone system that had remained virtually unchanged since the 1870s. That remarkable technological advance facilitated the rise of the networked home computer, cellular telephony, and the Internet, and users hailed the dawn of the digital information age. However, security agencies such as the FBI and MI5 were concerned. Since the emergence of telegraphy in the 1830s, security services could intercept private messages using wiretaps, and this was facilitated by some of the world's largest telecommunications monopolies such as AT&T in the US and British Telecom in the UK. The new, digital networks were incompatible with traditional wiretap technology. To make things more complicated for the security services, these monopolies had been privatized and broken up into smaller companies during the 1980s, and in the new deregulated landscape the agencies had to seek assistance from thousands of startup companies that were often unwilling to help. So for the first time in history, technological and institutional changes posed a threat to the security services' wiretapping activities, and government officials in Washington and London acted quickly to protect their ability to spy, they sought to force the industry to change the very architecture of the digital telecommunications network.

This book describes in detail the tense negotiations between governments, the telecommunications industry, and civil liberties groups during an unprecedented moment in history when the above security agencies were unable to wiretap. It reveals for the first time the thoughts of some of the protagonists in these crucial negotiations, and explains why their outcome may have forever altered the trajectory of our information society.

Dr. Joseph Fitsanakis specializes in intelligence and national security. His scholarly research and teaching concentrate on intelligence policy and practice, intelligence collection, information security, cyber espionage, and transnational criminal networks. His work has been translated into several languages and referenced by media outlets such as The Washington Post, NPR, BBC, ABC and Newsweek. Dr. Fitsanakis is associate professor in the Intelligence and National Security Studies program at Coastal Carolina University. Before joining Coastal, he built the Security and Intelligence Studies program at King University, where he also directed the King Institute for Security and Intelligence Studies.