A Course on Rough Paths: With an Introduction to Regularity Structures 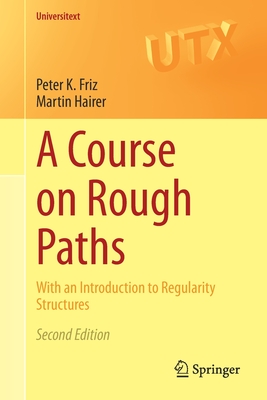 Rough path analysis provides the means for constructing a pathwise solution theory for stochastic differential equations which, in many respects, behaves like the theory of deterministic differential equations and permits a clean break between analytical and probabilistic arguments. Together with the theory of regularity structures, it forms a robust toolbox, allowing the recovery of many classical results without having to rely on specific probabilistic properties such as adaptedness or the martingale property.

Essentially self-contained, this textbook puts the emphasis on ideas and short arguments, rather than aiming for the strongest possible statements. A typical reader will have been exposed to upper undergraduate analysis and probability courses, with little more than It -integration against Brownian motion required for most of the text.

From the reviews of the first edition:

"Can easily be used as a support for a graduate course ... Presents in an accessible way the unique point of view of two experts who themselves have largely contributed to the theory" - Fabrice Baudouin in the Mathematical Reviews

"It is easy to base a graduate course on rough paths on this ... A researcher who carefully works her way through all of the exercises will have a very good impression of the current state of the art" - Nicolas Perkowski in Zentralblatt MATH

Peter K. Friz is presently Einstein Professor of Mathematics at TU and WIAS Berlin. His previous professional affiliations include Cambridge University and Merrill Lynch, and he holds a PhD from the Courant Institute of New York University. He has made contributions to the understanding of the Navier-Stokes equation as dynamical system, pioneered new asymptotic techniques in financial mathematics and has written many influential papers on the applications of rough path theory to stochastic analysis, ranging from the interplay of rough paths with Malliavin calculus to a (rough-) pathwise view on non-linear SPDEs. Jointly with N. Victoir he authored a monograph on stochastic processes as rough paths.

Martin Hairer KBE FRS is currently Professor of Mathematics at Imperial College London. He has mostly worked in the fields of stochastic partial differential equations in particular, and in stochastic analysis and stochastic dynamics in general. He made fundamental advances in various directions such as the study of hypoelliptic and/or hypocoercive diffusions, the development of an ergodic theory for stochastic PDEs, the systematisation of the construction of Lyapunov functions for stochastic systems, the development of a general theory of ergodicity for non-Markovian systems, multiscale analysis techniques, etc. Most recently, he has worked on applying rough path techniques to the analysis of certain ill-posed stochastic PDEs and introduced the theory of regularity structures. For this work he was awarded the Fields Medal at the 2014 ICM in Seoul.