Disney Stories: Getting to Digital 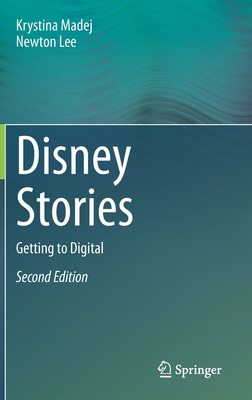 The second edition of Disney Stories: Getting to Digital will be of interest to lovers of Disney history and also to lovers of Hollywood history in general. The first edition was planned as a short history of the companies evolution from analog storytelling to a digital online presence that closed the chapter on early Disney films with the release of the groundbreaking Snow White. The purpose of the new edition is to bring to readers a more complete view of the analog-digital story by including three new chapters on film that cover key developments from the live-animation hybrids of the 1940s to CAPS and CGI in the 1990s and VR in the 2010s. It also includes in the discussion of cross-media storytelling the acquisition of the exceptional story property, Star Wars, and discusses how Disney has brought the epic into the Disney Master Narrative by creating Galaxy's Edge in its US theme parks.

Krystina Madej's engaging portrayal of the long history of Disney's love affair with storytelling and technology brings to life the larger focus of innovation in creating characters and stories that captivate an audience, and together with Newton Lee's detailed experience of Disney during the crucial 1995-2005 era when digital innovation in online and games was at its height in the company, makes for a fast-paced captivating read.

Disney Stories first edition explored the history of Disney, both analog and digital. It described in detail how Walt Disney used inventive and often ground-breaking approaches in the use of sound, color, depth, and the psychology of characters to move the animation genre from short visual gags to feature-length films with meaningful stories that engaged audience's hearts as well as tickled their funny bones. It showed Walt's comprehensive approach to engaging the public across all media as he built the Disney Master Narrative by using products, books, comics, public engagements, fan groups such as the Mickey Mouse club, TV, and, of course, Disneyland, his theme park. Finally it showed how, after his passing, the company continued to embrace Walt's enthusiasm for using new technology to engage audiences through their commitment to innovation in digital worlds. It describes in detail the innovative storybook CD-ROMs, their extensive online presence, the software they used and created for MMORGs such as Toontown, and the use of production methods such as agile methodology. This new edition provides insight on major developments in Disney films that moved them into the digital world.

Dr. Krystina Madej is an author, speaker, and Professor of the Practice at Georgia Tech, Atlanta. At Tech since 2011, she teaches about and researches how humans have adapted their narratives to changing media throughout the centuries, physical play and children's interaction with digital games that are based in narrative, and in Disney's approach to stories across media since the 1920s. Adjunct Professor with the School for Interactive Art and Technology (SIAT) at Simon Fraser University, Vancouver, for ten years, she taught as Visiting Professor for the Center for Digital Media's Master's degree program. She is research faculty at University of Lower Silesia, Wroclaw, Poland where as Visiting Professor she teaches Disney History and Children's Game Design for the Erasmus Program and Design Thinking and History of Social Media for the Big Data, Digital Media, and Trendwatching Master's Program. Prior to returning to academia in 1999, she was principal of a communications and design firm for 15 years, where, as design strategist, she planned and created successful branding programs and exhibits for government, business, industry, and museums.

Newton Lee is an author, educator, and futurist. He was the founder of Disney Online Technology Forum, creator of AT&T Bell Labs' first-ever commercial artificial intelligence tool, inventor of the world's first annotated multimedia OPAC for the U.S. National Agricultural Library, and longest serving editor-in-chief in the history of the Association for Computing Machinery for its publication Computers in Entertainment (2003-2018). Lee is the chairman of the California Transhumanist Party, education and media advisor to the United States Transhumanist Party, and president of the 501(c)(3) nonprofit Institute for Education, Research, and Scholarships. He graduated Summa Cum Laude from Virginia Tech with a B.S. and M.S. degree in Computer Science (specializing in Artificial Intelligence), and he earned a perfect GPA from Vincennes University with an A.S. degree in Electrical Engineering and an honorary doctorate in Computer Science. He has been honored with a Michigan Leading Edge Technologies Award, two community development awards from the California Junior Chamber of Commerce, and four volunteer project leadership awards from The Walt Disney Company.