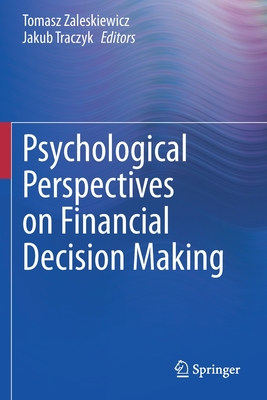 This book reviews the latest research from psychology, neuroscience, and behavioral economics evaluating how people make financial choices in real-life circumstances. The volume is divided into three sections investigating financial decision making at the level of the brain, the level of an individual decision maker, and the level of the society, concluding with a discussion of the implications for further research.

Among the topics discussed:

Psychological Perspectives on Financial Decision Making is a useful reference for researchers both in and outside of psychology, including decision-making experts, consumer psychologists, and behavioral economists.

Tomasz Zaleskiewicz is a Full Professor of Psychology and Head of the Center for Research in Economic Behavior at the SWPS University of Social Sciences and Humanities, Wroclaw, Poland. His research interests include the psychological mechanisms of decision making, the relationship between mental imagery and risk perception, and the psychology of people's economic behaviors. In addition to his scientific research, Professor Zaleskiewicz works as a consultant for profit and nonprofit organizations. He received his academic degrees from the University of Wroclaw in Poland and the SWPS University of Social Sciences and Humanities in Poland.