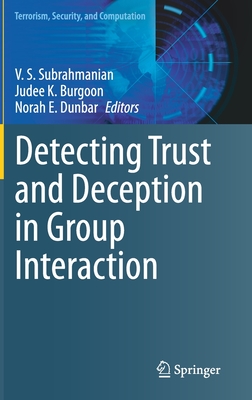 V.S. Subrahmanian is the Dartmouth College Distinguished Professor in Cybersecurity, Technology, and Society and Director of the Institute for Security, Technology, and Society at Dartmouth. He previously served as a Professor of Computer Science at the University of Maryland from 1989-2017 where he created and headed both the Lab for Computational Cultural Dynamics and the Center for Digital International Government. He also served for 6+ years as Director of the University of Maryland's Institute for Advanced Computer Studies. Prof. Subrahmanian is an expert on big data analytics including methods to analyze text/geospatial/relational/social network data, learn behavioral models from the data, forecast actions, and influence behaviors with applications to cybersecurity and counterterrorism. He has written five books, edited ten, and published over 300 refereed articles. He is a Fellow of the American Association for the Advancement of Science and the Association for the Advancement of Artificial Intelligence and received numerous other honors and awards. His work has been featured in numerous outlets such as the Baltimore Sun, the Economist, Science, Nature, the Washington Post, American Public Media. He serves on the editorial boards of numerous journals including Science, the Board of Directors of the Development Gateway Foundation (set up by the World Bank), SentiMetrix, Inc., and on the Research Advisory Board of Tata Consultancy Services. He previously served on DARPA's Executive Advisory Council on Advanced Logistics and as an ad-hoc member of the US Air Force Science Advisory Board.

Judee K. Burgoon is Director of Research for the Center for the Management of Information at the University of Arizona, where she holds titles as professor of communication, family studies and human development. She has authored or edited 17 books and monographs (Detecting Trust and Deception in Group Interaction, Social Signal Processing, Discovering Hidden Temporal Patterns in Behavior and Interaction, Nonverbal Communication, Interpersonal Adaptation, Small Group Communication, Mexican Americans and the Mass Media) and over 300 articles, chapters and reviews. Her current research on deception, dyadic interaction, and technologies for automated analysis of nonverbal and verbal communication has been funded by the National Science Foundation; Department of Defense Air Force, Army, Navy and ODNI; Department of Homeland Security; IARPA; and Gannett Foundation, among others. She is the recipient of the highest honors given by the International Communication Association and National Communication Association and has held several offices in NCA including Chair of the Nonverbal Communication Division and Chair of the Research Board. She also served as Site Director of the Center for Identification Research, an NSF multi-university research organization.

Norah E. Dunbar is a Professor of Communication at the University of California Santa Barbara. She teaches courses in nonverbal and interpersonal communication, communication theory, and deception detection. She is also an Affiliate Faculty in the Center for Information, Technology & Society; the Center for Digital Games Research; the Center for Responsible Machine Learning, and the Quantitative Methods in the Social Sciences program. She has received over $13 Million in research funding from agencies such as the Intelligence Advanced Research Projects Activity, the National Science Foundation, the Department of Defense, and the Center for Identification Technology Research. She has published over 65 peer-reviewed journal articles and book chapters and has presented over 100 papers at National and International conferences. Her research has appeared in top journals in her discipline including Communication Research, Communication Monographs, and Journal of Computer-Mediated Communication as well as interdisciplinary journals such as Journal of Management Information Systems and Computers in Human Behavior. She has served on the editorial board of over a dozen disciplinary journals and as the Chair of the Nonverbal Division of the National Communication Association in 2014-2016. She is the current Chair of the Communication Department at UCSB.