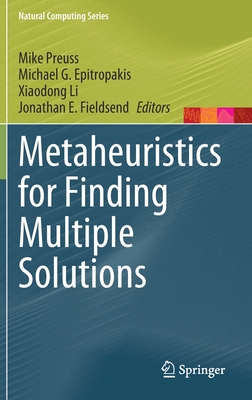 This book presents the latest trends and developments in multimodal optimization and niching techniques. Most existing optimization methods are designed for locating a single global solution. However, in real-world settings, many problems are "multimodal" by nature, i.e., multiple satisfactory solutions exist. It may be desirable to locate several such solutions before deciding which one to use. Multimodal optimization has been the subject of intense study in the field of population-based meta-heuristic algorithms, e.g., evolutionary algorithms (EAs), for the past few decades. These multimodal optimization techniques are commonly referred to as "niching" methods, because of the nature-inspired "niching" effect that is induced to the solution population targeting at multiple optima. Many niching methods have been developed in the EA community. Some classic examples include crowding, fitness sharing, clearing, derating, restricted tournament selection, speciation, etc. Nevertheless, applying these niching methods to real-world multimodal problems often encounters significant challenges.

To facilitate the advance of niching methods in facing these challenges, this edited book highlights the latest developments in niching methods. The included chapters touch on algorithmic improvements and developments, representation, and visualization issues, as well as new research directions, such as preference incorporation in decision making and new application areas. This edited book is a first of this kind specifically on the topic of niching techniques.

This book will serve as a valuable reference book both for researchers and practitioners. Although chapters are written in a mutually independent way, Chapter 1 will help novice readers get an overview of the field. It describes the development of the field and its current state and provides a comparative analysis of the IEEE CEC and ACM GECCO niching competitions of recent years, followed by a collection of open research questions and possible research directions that may be tackled in the future.

Mike Preuss is Assistant Professor at LIACS, the computer science institute of Universiteit Leiden in the Netherlands. Previously, he was with the information systems institute of WWU Muenster, Germany (headquarter of ERCIS), and before with the Chair of Algorithm Engineering at TU Dortmund, Germany, where he received his PhD in 2013. His research interests focus on the field of evolutionary algorithms for real-valued problems, namely on multimodal and multiobjective optimization, and on computational intelligence methods for computer games, and their successful application to real-world problems as chemical retrosynthesis.

Xiaodong Li received his B.Sc. degree from Xidian University, Xi'an, China, and Ph.D. degree in information science from the University of Otago, Dunedin, New Zealand, respectively. Currently, he is a full professor in the School of Science (Computer Science and Software Engineering) of RMIT University, Melbourne, Australia. His research interests include evolutionary computation, machine learning, data analytics, multiobjective optimization, dynamic optimization, multimodal optimization, large-scale optimization, and swarm intelligence. He serves as an Associate Editor of the IEEE Transactions on Evolutionary Computation, Swarm Intelligence (Springer), and the International Journal of Swarm Intelligence Research. He is a founding member of the IEEE CIS Task Force on Swarm Intelligence, and a former Chair of the IEEE CIS Task Force on Large-Scale Global Optimization. He is currently a Vice-chair of the IEEE CIS Task Force on Multi-Modal Optimization. He is the recipient of the 2013 SIGEVO Impact Award and the 2017 IEEE CIS "IEEE Transactions on Evolutionary Computation Outstanding Paper Award".

Michael G. Epitropakis received his B.S., M.Sc., and Ph.D. degrees from the Department of Mathematics, University of Patras, Patras, Greece. Currently, he is a director of technical products in The Signal Group, Athens, Greece. Previously, he was an Assistant Professor in Data Science at Lancaster University, Lancaster, UK. His current research interests include operations research, computational intelligence, evolutionary computation, swarm intelligence, multi-modal optimization, machine learning, and search-based software engineering. He is a founding member of the IEEE CIS Task Force on Multi-Modal Optimization acting as Chair/Co-Chair from its foundation.