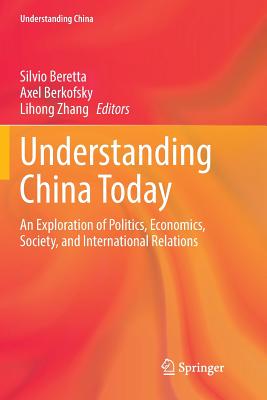 This book covers numerous areas and aspects of Chinese domestic and external politics and policies, the Chinese economy, Chinese society and culture, and Chinese literature and history. It is divided into four sections, the first of which focuses on China's place in world politics, including its relations with the European Union, Russia, India, Japan, the United States, and Africa. The second section among others addresses issues and areas related to China's role in and impact on the international economy, the strategies and positioning of Chinese multinational companies investing in Europe, the problems and challenges of China's banking and financial systems and China's foreign economic strategies. The final two sections are devoted to Chinese politics and society, and Italian views on Chinese culture, language, and literature. The volume is multidisciplinary in nature, with contributions from experts of politics, economics, history, law, literature, gender studies, and the media. It will appeal to a wide range of China scholars and analysts as well as to all who have an interest in international relations, Chinese politics, the Chinese economy, and Chinese society, culture, literature, and history.

Silvio Beretta is Professor at the Department of Political and Social Sciences at the University of Pavia and currently lecturer of international economic cooperation and development policies at the same department. Silvio Beretta is also former Dean and Director of the Department of Economics, Statistics and Law. He is member of the Istituto Lombardo-Accademia di Scienze e Lettere as well as Foreign Research Fellow at the Center of European Studies at the City University of New York and Honorary Member at the Academy for the Humanities and Sciences at the same university. Silvio Beretta is scientific director of the journal "Il Politico" and has extensively published on international and European economics, on decision-making processes of Italy's economic policies, the territorial structure of financial systems and the history of economic policy and comparative economic systems.
Axel Berkofsky is former Gianni Mazzocchi Fellow at the University of Pavia and since 2011 Professor at the Department of Political and Social Sciences at the same university. Currently, he is also Senior Associate Research Fellow at the Milan-based Istituto per gli Studi di Politica Internazionale (ISPI), Executive Committee Board Member at the Stockholm-based European Japan Advanced Research Network (EJARN) and Senior Advisor at the Brussels-based EU-Asia Centre. Previously, Axel Berkofsky was Senior Policy Analyst and Associate Policy Analyst at the Brussels-based European Policy Centre (EPC), Research Fellow at the Brussels-based European Institute for Asian Studies (EIAS). Axel Berkofsky has authored two books and has published more than 200 academic, articles and essays in journals, newspapers and magazines. He has lectured and taught at numerous think tanks, research institutes and universities in Europe and Asia. His research interests are amongst others Japanese and Chinese foreign and security policies, Asian security and EU-Asia relations.
Lihong Zhang is senior fellow of the European Center of International Affairs (Brussels, Belgium) and a Full Professor of Civil Law, Roman Law, and Comparative Law at the East China University of Political Science and Law, Shanghai, where he is also Director of the Research Center of Roman Law and European Law and Vice-Director of the Civil Law Research Center. Professor Zhang is Vice General Secretary of China's National Society of Civil Law, Director of China's National Society of Comparative Law, and Standing Director of China's National Society of European Law. He has been a Fellow at the Asian Law Institute of the National University of Singapore and a visiting scholar or professor at leading universities in Europe and the United States. Professor Zhang is a member of the international editorial boards of Comparative Legal History and Quaderni Fiorentini (Italy). He is also a legal adviser for many international bodies and an attorney at law in China. He has published 18 books (10 co-edited) and more than 90 articles in Chinese and international academic journals.