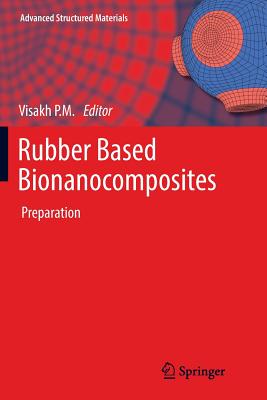 Leading researchers from industry, academy, government and private research institutions across the globe have contributed to this book, which presents all types of rubber blend composites based on biomaterials as well as nanocomposites. It discusses the fundamental preparation methods of these materials and summarizes many of the latest technical research advances, offering an essential guide for academics, researchers, scientists, engineers and students alike.

Dr. Visakh P.M. is currently a research associate (Under the guidance of Prof. Olga B Nazarenko) at the Department of Ecology and Basic Safety, Tomsk Polytechnic University (TPU), Russia. He received his PhD, MPhil and MSc degreases from the School of Chemical Sciences, Mahatma Gandhi University, Kottayam, Kerala, India. He has edited 20 books from Scrivener (Wiley), Springer, the Royal Society of Chemistry, and Elsevier. He has been invited as a visiting researcher to Russia (2014 to the present), Portugal (2013, 2014), Czech Republic (2012, 2013) Italy (2009, 2012), Argentina (2010) Sweden (2010, 2011, 2012), Switzerland (2010), Spain (2011, 2012), Slovenia (2011), France (2011), Belgium (2012) and Austria (2012). He has attended and presented at more than 28 conferences, has 303 citations and his h-index is 9. Dr. Visakh is also currently a guest editor for 4 international journals. His research interests include polymer nanocomposites, bio-nanocomposites and rubber-based nanocomposites, fire retardant polymers, liquid crystalline polymers and silicon sensors.