Philosophical Foundations of Quality of Life: The Selected Works of Alex C. Michalos 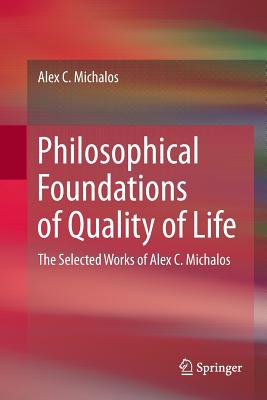 This first volume has as its main focus the philosophical foundations of Michalos' work and describes it in the broad context of the study of logic, the philosophy of social sciences, and a general theory of value. After distinguishing things that have value from the value that things might have, it describes the foundations of a pragmatic theory of value. This theory plays a key role in the author's research on the quality of life and connects his empirical research to the philosophical tradition of the American pragmatists William James, Ralph Barton Perry, John Dewey and Clarence Irving Lewis. The volume addresses various aspects and issues concerning decision making, including decision procedures used in committees, used for assessing the acceptability of scientific theories and new technologies, procedures for a science court, ethical issues involved in the formation of beliefs, some limitations of classical economists' alleged postulates of rational preference, and the importance of analytic guides to decision making. Finally, it describes the organization of the Social Sciences Federation of Canada and a formal accounting system for scientific research.

Prof. Alex Michalos currently serves as an Adjunct Professor of Philosophy at Brandon University. He is also the Director of Research for the Canadian Index of Wellbeing and Emeritus Professor in Political Science at his former institution, the University of Northern British Columbia. Michalos has published 24 books, over 100 refereed articles, and founded or co-founded seven scholarly journals. Among the seven, he is Editor in Chief for the Journal of Business Ethics, the most frequently cited journal in the world devoted to business ethics, and Social Indicators Research, the first scholarly journal devoted to quality of life research. He is married to Dr. Deborah Poff, President and Vice-Chancellor of Brandon University.