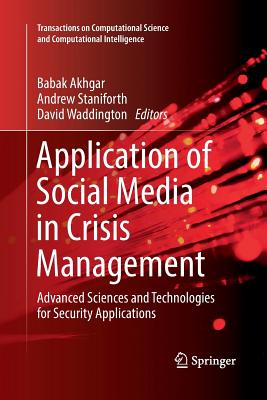 This book explores how social media and its advances enables citizens to empower themselves during a crisis. The book addresses the key issues related to crises management and social media as the new platform to assist citizens and first responders dealing with multiple forms of crisis, from major terrorist attacks, larger scale public disorder, large-scale movement of people across borders, and natural disasters. The book is based on the results and knowledge gained during the European Commission ATHENA project which has been addressing critical issues in contemporary crisis management and social media and smart mobile communications. This book is authored by a mix of global contributors from across the landscape of academia, emergency response and experts in government policy and private industry. This title explores and explains that during a modern crisis, the public self-organizes into voluntary groups, adapt quickly to changing circumstances, emerge as leaders and experts and perform life-saving actions; and that they are increasingly reliant upon the use of new communications media to do it.

Babak Akhgar is Professor of Informatics and Director of CENTRIC (Center of excellence in terrorism, resilience, intelligence and organized crime research) at Sheffield Hallam University and Fellow of the British Computer Society. He has more than 100 referred publications in international journals and conferences on information systems with specific focus on knowledge management (KM). He is member of editorial boards of a number of international Journals, Chair and program committee member of several international conferences. He has extensive and hands on experience in development, management and execution of large international security initiatives (e.g. Application of social media in crisis management, intelligence based combating of terrorism and organised crime, Gun crime, cyber security, Big Data and cross cultural ideology polarization) with multi million Euros budgets. In addition to this he is the technical lead of 3 EU Security projects; "Courage" on Cyber Crime and Cyber Terrorism and "Athena project" on Application of social media and mobile devices in crisis management and TENSOR on identification of terrorist generated internet content. He has co-edited a book on Intelligence management (Knowledge Driven frameworks for combating Terrorism and Organised crime). His recent books are titled Strategic Intelligence Management (National Security Imperatives) and Information and Communications Technologies Emerging Trends in ICT Security, Application of Big Data for National Security and Cyber Crime and Cyber Terrorism-practitioners guide. Prof Akhgar is board member of European Organisation for Security (EOS), and member academic board of SAS UK.
David Waddington is Professor of Communications, Co-director of the Cultural, Communication & Computing Research Institute, Academic Chair of CENTRIC (Center of excellence in terrorism, resilience, intelligence and organized crime research) and Head of the Communication & Computing Research Centre at Sheffield Hallam University (SHU). He was also Chair of his faculty's Research Ethics Committee from February 2008 to February 2013. Waddington has been employed at SHU (which was previously known as Sheffield City Polytechnic) since 1983 - initially as a Postdoctoral Research Associate on an ESRC project investigating 'Communication processes within and around "flashpoints" of Public Disorder'. This focus on the policing of riots, disorderly demonstrations and picket-line confrontations was instrumental to the development of Waddington's 'Flashpoints Model of Public Disorder', which is frequently referred to in the European, North American and Antipodean policing literatures. Among his best-known publications are the seminal (with Chas Critcher and Karen Jones, Routledge, 1989); Contemporary Issues in Public Disorder (Routledge, 1992); Public Order Policing: Theoretical and Practical Approaches (Willan, 2007); Rioting in France and the UK: A Comparative Analysis (co-edited with Fabien Jobard and Mike King, Willan, 2009); and Riots - An International Comparison (with Matthew Moran, Palgrave Macmillan, 2016). Waddington is currently on the International Editorial Board of Mobilization: An international Social Movements Journal. From 2011-2013 he was External Evaluator of the EU-funded GODIAC project, which brought together 12 European partner countries in search of a distinctively more enlightened and permissive 'European approach' to protest policing.
Detective Inspector Andrew Staniforth of West Yorkshire Police has extensive counter-terrorism experience in the UK. As a professionally qualified teacher, he has designed national counter-terrorism training and exercising programmes, delivered training to police commanders form across the world and has supported missions of the United Nations Terrorism Prevention Branch. Andrew is a Senior Research Fellow at the School of Law, University of Leeds and a Non-Resident Fellow in Counter-Terrorism and National Security at the Trends Research and Advisory Institute. Andrew is the author and editor of numerous articles on counter-terrorism and national security. His most recent books include; Blackstone's Counter-Terrorism Handbook (3rd edition) (Oxford University Press 2013); Blackstone's Handbook of Ports and Borders Security (Oxford University Press 2013); Preventing Terrorism and Violent Extremism (Oxford University Press 2014); Cyber Crime and Cyber Terrorism Investigators Handbook (Elsevier, 2014); Blackstone's Handbook of Cyber Crime Investigation (Oxford University Press in press 2017); and Big Data Applications for National Security (Elsevier 2015). Qualified in PRINCE2, Andrew now leads an innovative police research team at the Office of the Police and Crime Commissioner for West Yorkshire, progressing multi-disciplinary international research and innovation projects. Andrew is the Project Coordinator of ATHENA, funded by the European Commission under the Seventh Framework Programme.