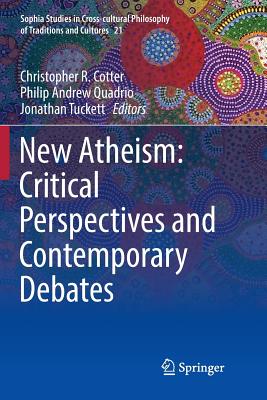 Whether understood in a narrow sense as the popular works of a small number of (white male) authors, or as a larger more diffuse movement, twenty-first century scholars, journalists, and activists from all 'sides' in the atheism versus theism debate, have noted the emergence of a particular form of atheism frequently dubbed 'New Atheism'. The present collection has been brought together to provide a scholarly yet accessible consideration of the place and impact of 'New Atheism' in the contemporary world.

Combining traditional and innovative approaches, chapters draw on the insights of philosophers, religious studies scholars, sociologists, anthropologists, and literary critics to provide never-before-seen insights into the relationship between 'New Atheism', science, gender, sexuality, space, philosophy, fiction and much more. With contributions from Australia, Germany and the United Kingdom, the volume also presents diversity in regard to religious/irreligious commitment, with contributions from atheists, theists and more agnostic orientations.

New Atheism: Critical Perspectives and Contemporary Debates features an up-to-date overview of current research on 'New Atheism', a Foreword from Stephen Bullivant (co-editor of The Oxford Handbook of Atheism), and eleven new chapters with extensive bibliographies that will be important to both a general audience and to those conducting research in this area. It provides a much-needed fresh look at a contentious phenomenon, and will hopefully encourage the cooperation and dialogue which has predominantly been lacking in relevant contemporary debates.

Christopher R. Cotter is Founding Editor and Podcast Co-Host at the Religious Studies Project, and has recently submitted his doctoral dissertation at Lancaster University, UK. His research focuses upon discourses on 'religion', 'non-religion' and 'the secular', and the ensuing theoretical implications for Religious Studies. He is co-editor of Social Identities between the Sacred and the Secular (Ashgate, 2013), and After World Religions: Reconstructing Religious Studies (Routledge, 2016). He is also Co-Director at the Nonreligion and Secularity Research Network and Honorary Treasurer of the British Association for the Study of Religions.

Philip Andrew Quadrio is a philosopher and criminologist, based at the University of Sydney, who works on crime theory, subjectivity, political philosophy, philosophy of religion and history of philosophy. He is author of Towards a Theory of Organic Relations: Social Theory in Hegel's Early Writings, and has edited several collections including Politics and Religion in the New Century, The Relation of Philosophy to Religion Today, and Infinitely Demanding: Simon Critchley's Neo-Anarchism. Philip is a former President of the Australasian Philosophy of Religion Association.

Jonathan Tuckett is a phenomenologist specialising in philosophical anthropology, intersubjectivity and religion. His work looks at the ways people are deemed "religious" as a means of exclusion from norm and knowledge production. He has worked as a teaching fellow for Stirling and Edinburgh. He is currently an independent researcher focusing on what is counted as "social science" based on "who" is included and how this has changed due the Research Excellence Framework and publishing industry.