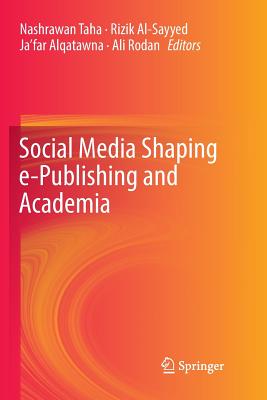 Dr. Taha received her PhD degree from the University of Sheffield, UK in 2012 for a thesis investigating the social network dynamics of international students in UK. She also holds a Master's degree in Information Technology from the National University of Malaysia and a BSc in Applied Mathematics from Jordan University of Science and Technology.

Her research mainly concerns social network dynamics and analysis. She has published in highly ranked journals and has presented her work at many international conferences. Her current research interests are in the field of social media, particularly the applications of social media in different contexts. Dr. Taha and three other colleagues recently received funding from the AOU-Kuwait to work on a programming project using 3D Visual Tool.

Dr. Rizik Al-Sayyed is currently an Associate Professor at King Abdullah II School for Information Technology, University of Jordan. Dr. Rizik holds a B.Sc. from the University of Jordan (1984), an M.Sc. from Western Michigan University (1995), and a Ph.D. from Leeds Beckett University (Leeds Metropolitan University, 2007), all in Computer Science. His main areas of interest include Networking (Cloud Computing, Social Networks, Wireless, and Simulation), Database Design and Optimization (email: r.alsayyed@ju.edu.jo).

Dr. Ja'far Alqatawna is an Associate Professor at King Abdullah II School for Information Technology, University of Jordan. He received his B.Eng degree in Computer Engineering from Mu'tah University, Jordan, followed by an MSc. in Information and Communication Systems Security from the Royal Institute of Technology (KTH), Sweden. In 2010 he was awarded his PhD. in Computer Information Systems with a specialization in Information Security and e-Business from Sheffield Hallam University, UK. Dr. Alqatawna is the co-founder of the Jordan Information Security and Digital Forensics research group (JISDF). In 2016 he served as technical chair for the international Cybersecurity and Cyberforensics Conference CCC 2016. He was part of a research project investigating XACML as a policy language for distributed networks at the Security, Policy and Trust (SPOT) Lab, part of the Swedish Institute of Computer Science (SICS). Also, he was a visiting lecturer at Granada University, Spain. He frequently serves as a reviewer for many JCR journals and international conferences. His research interests include the design and assessment of security mechanisms, security intelligence, and cyber security. Currently, Dr. Alqatawna is head of the Business Information Technology department and the Post-Graduate Coordinator for the MSc. Program in Web Intelligence, University of Jordan.