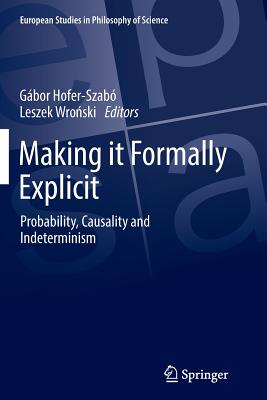 This book collects research papers on the philosophical foundations of probability, causality, spacetime and quantum theory. The papers are related to talks presented in six subsequent workshops organized by The Budapest-Kraków Research Group on Probability, Causality and Determinism.

Coverage consists of three parts. Part I focuses on the notion of probability from a general philosophical and formal epistemological perspective. Part II applies probabilistic considerations to address causal questions in the foundations of quantum mechanics. Part III investigates the question of indeterminism in spacetime theories. It also explores some related questions, such as decidability and observation.

The contributing authors are all philosophers of science with a strong background in mathematics or physics. They believe that paying attention to the finer formal details often helps avoiding pitfalls that exacerbate the philosophical problems that are in the center of focus of contemporary research.

The papers presented here help make explicit the mathematical-structural assumptions that underlie key philosophical argumentations. This formally rigorous and conceptually precise approach will appeal to researchers and philosophers as well as mathematicians and statisticians.

Gábor Hofer-Szabó is a Senior Research Fellow in the Institute of Philosophy, Research Center for the Humanities at the Hungarian Academy of Sciences. His main fields of research are foundations of quantum mechanics, interpretations of probability and probabilistic causality.
Leszek Wroński is an Associate Professor at the Institute of Philosophy of the Jagiellonian University in Kraków. He is mainly interested in formal epistemology and philosophy of probability, having authored and co-authored also papers on probabilistic causality and the Branching Space-Times theory.