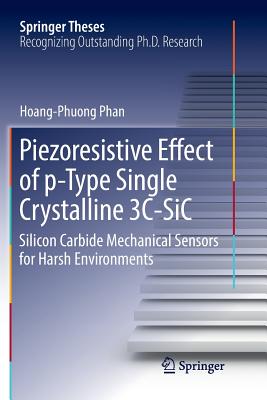 This book addresses the piezoresistance in p-type 3C-SiC, which it investigates using experimental characterization and theoretical analysis. The gauge factor, the piezoresistive coefficients in two-terminal and four-terminal resistors, the comparison between single crystalline and nanocrystalline SiC, along with the temperature dependence of the piezoresistive effect in p-type 3C-SiC are also discussed.
Silicon carbide (SiC) is an excellent material for electronic devices operating at high temperatures, thanks to its large energy band gap, superior mechanical properties and extreme chemical inertness. Among the numerous polytypes of SiC, the cubic single crystal, which is also well known as 3C-SiC, is the most promising platform for microelectromechanical (MEMS) applications, as it can be epitaxially grown on an Si substrate with diameters of up to several hundred millimeters. This feature makes 3C-SiC compatible with the conventional Si-based micro/nano processing and also cuts down the cost of SiC wafers.
The investigation into the piezoresistive effect in 3C-SiC is of significant interest for the development of mechanical transducers such as pressure sensors and strain sensors used for controlling combustion and deep well drilling. Although a number of studies have focused on the piezoresistive effect in n-type 3C-SiC, 4H-SiC and 6H-SiC, comparatively little attention has been paid to piezoresistance in p-type 3C-SiC.
In addition, the book investigates the piezoresistive effect of top-down fabricated SiC nanowires, revealing a high degree of sensitivity in nanowires employing an innovative nano strain-amplifier. The large gauge factors of the p-type 3C-SiC at both room temperature and high temperatures found here indicate that this polytype could be suitable for the development of mechanical sensing devices operating in harsh environments with high temperatures.

Dr. Hoang-Phuong Phan received his B.Eng. and M.Eng. from The University of Tokyo, Japan in 2011 and 2013, and his PhD from the Queensland Micro and Nano Technology Centre at Gri_th University, Australia in 2016. Since 2016, he has been a research fellow at the Queensland Micro- and Nanotechnology Centre. He was a visiting scholar at the Advanced Institute of Science and Technology (AIST), and Aichi Institute of Technology (AIT) both in Japan. His research interests include Micro Electro-Mechanical Systems, advanced materials, physics of semiconductors, and nanotechnologies. Dr. Phan was awarded the Japanese Government Scholarship (MEXT) for undergraduate and postgraduate studies from 2006 to 2013, and the GUPRS and GUPS scholarships from Gri_th from 2013 to 2016. Dr. Phan is currently working on the development of Integrated Cooling Technologies (IceTech) for SiC power devices funded by Australian Research Council (ARCLP150100153) with Prof. Nam-Trung Nguyen's group at Queensland Micro and Nanotechnology Centre.