Encouraging Openness: Essays for Joseph Agassi on the Occasion of His 90th Birthday 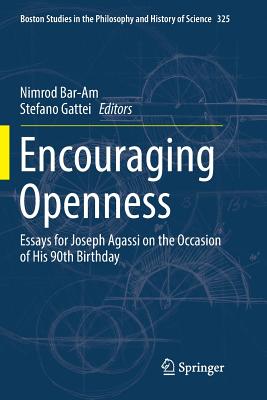 This volume features forty-two essays written in honor of Joseph Agassi. It explores the work and legacy of this influential philosopher, an exciting and challenging advocate of critical rationalism. Throughout six decades of stupendous intellectual activity, Agassi called attention to rationality as the very starting point of every notable philosophical way of life.
The essays present Agassi's own views on critical rationalism. They also develop and expand upon his work in new and provocative ways. The authors include Agassi's most notable pupils, friends, and colleagues. Overall, their contributions challenge the received view on a variety of issues concerning science, religion, and education.
Readers will find well-reasoned arguments on such topics as the secular problem of evil, religion and critical thinking, liberal democratic educational communities, democracy and constitutionalism, and capitalism at a crossroad.To Joseph Agassi, philosophy is the practice of reason, where reason is understood as the relentless search for criticisms of the best available explanations that we have to the world around us. This book not only honors one of the most original philosophers of science today. It also offers readers insights into a school of thought that lies at the heart of philosophy.

Nimrod Bar-Am is a philosopher of science specializing in logic and communication. He is currently a senior lecturer at the communication department, Sapir College. He studies the history of scientific method in general and methodological challenges within the social sciences in particular. His most recent publication is In Search of a Simple Introduction to Communication (Springer 2016). He was Joseph Agassi's research assistant (1993-1998), and published a couple of peer-reviewed papers with him.
Stefano Gattei is a philosopher and historian of science, currently Marie Sklodowska-Curie fellow at the University of Edinburgh and Eleanor Searle Visiting Professor in History at the California Institute of Technology. He worked extensively on key issues and authors of contemporary philosophy of science, as well as on the history of early modern astronomy and cosmology. Most recently, he co-edited, with Joseph Agassi, the fourth volume of Paul Feyerabend's collected philosophical papers: Physics and Philosophy (New York: Cambridge University Press, 2015). His Early Biographies of Galileo is forthcoming with Princeton University Press; he is currently working on a book on Johannes Kepler and the role of engraved frontispieces and title-pages in the Scientific Revolution (under contract with Oxford University Press).