The Birth of Modern Astronomy 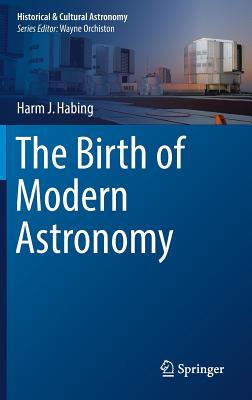 This richly illustrated book discusses the ways in which astronomy expanded after 1945 from a modest discipline to a robust and modern science. It begins with an introduction to the state of astronomy in 1945 before recounting how in the following years, initial observations were made in hitherto unexplored ranges of wavelengths, such as X-radiation, infrared radiation and radio waves. These led to the serendipitous discovery of more than a dozen new phenomena, including quasars and neutron stars, that each triggered a new area of research.

The book goes on to discuss how after 1985, the further, systematic exploration of the earlier discoveries led to long-term planning and the construction of new, large telescopes on Earth and in Space. Key scientific highlights described in the text are the detection of exoplanets (1995), the unexpected discovery of the accelerated expansion of the Universe (1999), a generally accepted model for the large-scale properties of the Universe (2003) and the ΛCDM theory (2005) that explains how the galaxies and stars of the present Universe were formed from minute irregularities in the (almost) homogenous gas that filled the early Universe.

All these major scientific achievements came at a price, namely the need to introduce two new phenomena that are as yet unexplained by physics: inflation and dark energy. Probably the deepest unsolved question has to be: Why did all of this start with a Big Bang?

Professor Habing has published over 350 papers in scientific journals and has written multiple books, including "Asymptotic Giant Branch Stars" (Springer). Further, he has received the Medal for Exceptional Scientific Achievement from NASA and the Gilles Holst medal in gold from the Royal Dutch Academy of Science. He is also Chevalier de l' ordre de la Légion d'honneur.