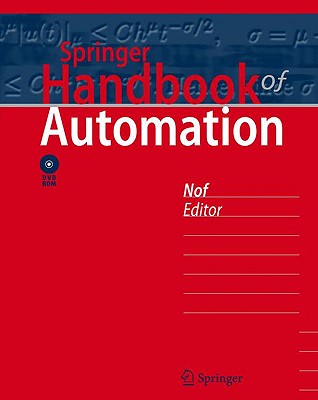 Automation is undergoing a major transformation in scope and dimension and plays an increasingly important role in the global economy and in our daily lives. Engineers combine automated devices with mathematical and organizational tools to create complex systems for a rapidly expanding range of applications and human activities. The Springer Handbook of Automation incorporates these new developments and presents a widespread and well-structured conglomeration of new emerging application areas of automation. Besides manufacturing as a primary application of automation, the handbook contains new application areas such as medical systems and health, transportation, security and maintenance, service, construction and retail as well as production or logistics. This Springer Handbook is not only an ideal resource for automation experts but also for people new to this expanding field such as engineers, computer scientists, designers. It is edited by an internationally renowned and experienced expert.

Chapters in Part A explain the significant influence of automation on our life, on individuals, organizations, and society, in economic terms and context, and impacts of precision, accuracy and reliability with automatic and automated equipment and operations. The theoretical and scientific knowledge about the human role in automation is covered in Part B from the human-oriented and human-centered aspects of automation to be applied and operated by humans, to the human role as supervisor and intelligent controller of automation systems and platforms. This part concludes with analysis and discussion on the limits of automation to the best of our current understanding. Covering automation design from theory to building automation machines, systems, and systems-of-systems, Part C explains the fundamental elements of mechatronics, sensors, robots, and other components useful for automation, and how they are combined with control and automation software, including models and techniques for automation software engineering, and the automation of the design process itself. Chapters in Part D cover the basic design requirements for the automation and illustrate examples of how the challenging issues can be solved for the deign and integration of automation with respect to its main purpose: Continuous and discrete processes and industries, design techniques, criteria and algorithms for flow lines, and integrated automation. Concluding this part is the design for safety of automation, and of automation for safety. The main aspects of automation management are covered by the chapters in Part E: Cost effectiveness and economic reasons for the design, feasibility analysis, implementation, rationalization, use, and maintenance of particular automation; performance and functionality measures and criteria. Related also are the issues of how to manage automatically and control maintenance, replacement, and upgrading. Part F, industrial automation, begins with explanation of machine tool automation, including various types of numerical control (NC), flexible, and precision machinery for production, manufacturing, and assembly, digital and virtual industrial production, to detailed design, guidelines and application of automation in the principal industries, from aerospace and automotive to semi-conductor, mining, food, paper and wood industries. Chapters are also devoted to the design, control and operation of functions common to all industrial automation. Infrastructures and service automation are covered in Part G and it is explained how automation is designed, selected, integrated, justified and applied, its challenges and emerging trends in those areas and in the construction of structures, roads and bridges; of smart buildings, smart roads and intelligent vehicles; cleaning of surfaces, tunnels and sewers; land, air, and space transportation; information, knowledge, learning, training, and library services; and in sports and entertainment. Automation in medical and healthcare systems is covered in Part H and shows the exponential penetration and main contributions of automation to the health and medical well being of individuals and societies. First, the scientific and theoretical foundations of control and automation in biological and biomedical systems and mechanisms are explained, then specific areas are described and analyzed. Available, proven, and emerging automation techniques in healthcare delivery and elimination of hospital and other medical errors are also addressed. Finally, Part I, Home, Office, and Enterprise Automation is about functional automation areas at home, in the office, and in general enterprises, including multi-enterprise networks. Chapters also cover the automation theories, techniques and practice, design, operation, challenges and emerging trends in education and learning, banking, commerce. An important dimension of the material compiled for this part is that it is useful for all other functional areas of automation. The concluding part of this Springer Handbook contains figures and tables with statistical information and summaries about automation applications and impacts in four main areas: industrial automation, service automation, healthcare automation, and financial and e-commerce automation. A rich list of associations and of periodical publications around the world that focus on automation in its variety of related fields is also included for the benefit of readers worldwide.

Plenty of case studies, creative examples and unique illustrations, covering topics of automation from the basics and fundamentals to advanced techniques, cases and theories will serve the readers and benefit the students and researchers, engineers and managers,

Shimon Y. Nof is Professor of Industrial Engineering at Purdue University, since 1977, and Director of the NSF and industry funded PRISM Center for Production, Robotics, and Integration Software for Manufacturing & Management (established 1991) whose motto is: "Knowledge Through Information, Wisdom Through Collaboration" and the PGRN, PRISM Global Research Network. He earned his BSc and MSc in Industrial Engineering & Management, Technion, Israel Institute of Technology, specializing in human-machine systems; his PhD in Industrial & Operations Engineering, University of Michigan, specializing in automation of facilities design; Dr. h.c. from the University of Sibiu, Romania.

He has over eight years of experience in full-time industrial and governmental positions, and has been a visiting professor at MIT and at universities in Chile, Europe, Hong Kong, Israel, Japan, and Mexico. Currently, he is the President of IFPR, the International Foundation of Production Research, he served as IFPR Secretary General during 1993-2007; recent Chair, Coordinating Committee on Manufacturing and Logistics Systems (CC5) of IFAC, the International Federation of Automatic Control. Professor Nof pioneered knowledge-based computer-aided facility design and control models, robot ergonomics, and collaborative control theory.

Professor Nof is the author, co-author and editor of ten books, including the Handbook of Industrial Robotics 1st and 2nd editions, the International Encyclopedia of Robotics, Information and Collaboration Models of Integration, and Industrial Assembly. In addition, he has published over 130 refereed journal articles and over 300 conference articles and book chapters. Among his honors, he is a Fellow of The Institute of Industrial Engineering, recipient of the Joseph Engelberger Award and Medal for Robotics Education, and Member of the Inaugural Book of Great Teachers of Purdue University. He is the editor of the new Springer Book Series on ACES, Automation, Collaboration, and E-Services.