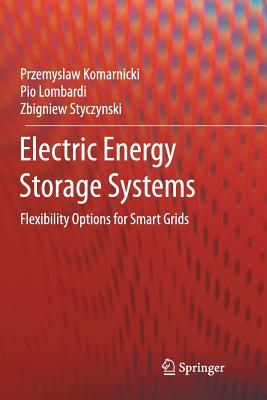 
Univ.-Prof.Dr.Zbigniew Styczynski held the Chair for Electrical Networks and Renewable Energy Sources at the Otto-von-Guericke University Magdeburg, Germany, until April, 2015. He was a lecturer at the University of Stuttgart and the TU Wroclaw. He is a member of IEEE, CIGRE and ETG. From 2007 to 2011 he headed at CIGRE / Paris the world wide active Working Group C6.15 Electric Energy Storage System and is a member of a current Working Group on the subject of energy storage, C6.30. Dr.-Ing. Pio Lombardi works at the Fraunhofer Institute for Factory Operation and Automation in Magdeburg, Germany. He received his PhD in the field of optimization of VPP. He is a member of the ETG and CIGRE, where he was secretary in the CIGRE WG C6.15 and active member of the CIGRE WG C6.30 (The Impact of Battery Energy Storage Systems on Distribution Networks) and C6.22 (Microgrid Evolution Roadmap). Dr.-Ing. Przemyslaw Komarnicki is Deputy Business Unit Manager Process and Plant Technology at the Fraunhofer Institute IFF in Magdeburg, Germany. He received his PhD working in the field of monitoring of distribution networks and in FNN, DKE, IEEE and IEC committees. In the areas of network operation, -monitoring and security and on energy storage, he led several research projects.