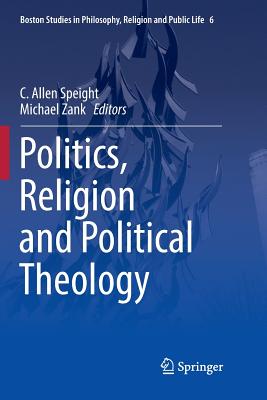 This new volume gives discursive shape to several key facets of the relationship among politics, theology and religious thought. Powerfully relevant to a wealth of further academic disciplines including history, law and the humanities, it sharpens the contours of our understanding in a live and evolving field. It charts the mechanisms by which, contrary to the avowed secularism of many of today's polities, theology and religion have often, and sometimes profoundly, shaped political discourse. By augmenting this broader analysis with a selection of authoritative papers focusing on the prominent sub-field of political theology, the anthology offsets a startling academic lacuna. Alongside focused analysis of subjects such as conscience, secularism and religious tolerance, the discussion of political theology examines the tradition's critical moments, including developments during the post-World War I Weimar republic in Germany and the epistemological imprint the theory has left behind in works by political thinkers influenced by the three major monotheistic traditions.

Allen Speight (Ph.D., University of Chicago) is Associate Professor of Philosophy and Chair of the Department of Philosophy at Boston University. A recipient of Fulbright, DAAD and Berlin Prize Fellowships, he is the author of Hegel, Literature and the Problem of Agency (Cambridge University Press, 2001); The Philosophy of Hegel (McGill-Queen's University Press/Acumen, 2008) and of numerous articles on aesthetics and ethics in German idealism; he is also co-editor/translator (with Brady Bowman) of Hegel's Heidelberg Writings (Cambridge University Press, 2009); and co-editor of Justice, Responsibility and Reconciliation in the Wake of Conflict (Boston Studies in Philosophy, Religion and Public Life, 2013).

Michael Zank, a native of Germany, holds advanced degrees in Protestant Theology and Near Eastern and Judaic and Studies. He teaches religious studies and philosophy of religion at Boston University where he also serves as director of the Elie Wiesel Center for Jewish Studies. He is the author, most recently, of Jewish Philosophy of Religion as Mosaic Faith Apologetics (Tübingen 2016; in German) and of Jerusalem. A Brief History, forthcoming with Blackwell Publ.