Initiatives of Regional Integration in Asia in Comparative Perspective: Concepts, Contents and Prospects 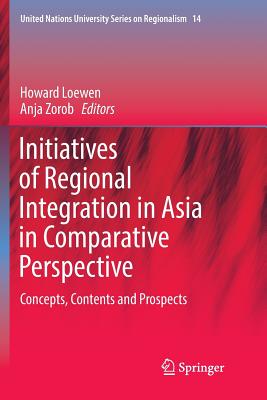 The aim of this book is to explore the past, present and future role of regional integration initiatives in Asia. Influenced by phenomena like the end of bipolarity, domestic dynamics, the Asian crisis, economic block¬building, the rise of China and India and the slow pace of international trade negotiations, regionalism flourished in Asia and its major sub¬regions (East Asia, South Asia, Central Asia, Middle East) especially since the beginning of the 1990s. Many countries in Asia form part of a steadily growing network of regional integration agreements (RIAs). These treaties are mostly signed bilaterally between countries neighbouring each other or that belong to the same sub¬region. In Asia this pattern applies in particular to the sub¬regions of both the Middle East and East Asia. Lately, however, also agreements were concluded or are in the making between countries from across the region connecting countries like Jordan and Singapore, China and Pakistan or the Arab Gulf Countries with Malaysia, India or Pakistan. In addition, there are a host of multilateral RIAs such as the Association of Southeast Asian Nations (ASEAN), ASEAN + 3, Asia Pacific Economic Organization (APEC), the Shanghai Cooperation Organization (SCO) or the Gulf Cooperation Council (GCC) and last but not least the Organization of the Islamic Conference (OIC).

The differences between RIAs and their effects on regional integration processes are the core aspects to be investigated in this book.

Against this background, each chapter or case study deals with one or more of the following dimensions or issues of regional integration covering both theoretical and empirical aspects of the overall question: - Introducing new methodological and/or innovative theoretical conceptualizations regarding the causes and effects of libateral/multilateral RIAs - Debating and comparing preconditions for successful integration among RIAs in Asia/its major sub¬regions - Assessing and comparing concepts underlying the design of existing and potential future RIAs in Asia - Measuring outcomes of formal initiatives of integration and market¬driven patterns of regionalization in different policy fields (trade, investment, political and security cooperation etc.) - Assessing the role of regional powers / potential Hubs (China, Japan, India) as well as extra¬regional actors (USA, EU) in promoting or hindering regional economic and/or political cooperation/integration - Case studies of bilateral and multilateral RIAs in Asia and their interplay with global economic institutions / governance.

Most of the literature and conferences or workshops organized on topics of regionalism / regionalization in Asia have concentrated to date on one specific area or sub-region, i.e. the Middle East or South-East Asia or they have focused on a specific academic discipline. This book, however, brings together scholars and practitioners in international development cooperation from different disciplinary backgrounds. In addition, it promises to take up an 'inter-Asian' perspective offering the opportunity to explore and compare the fairly diverse experiences of regionalization gained thus far in the different parts of Asia.

Anja Zorob (PhD) is member of the board of directors at the Centre for Mediterranean Studies (ZMS) at Ruhr-University Bochum (RUB), Germany, and heads the university-wide project "University without Borders" (RUB Administrative Department 2). Before joining "University without Borders," she was a senior research fellow at the Institute of Development Research and Development Policy. She obtained her PhD in Contemporary Research on the Middle East (Major: Economics) from the University of Erlangen-Nuremberg in 2005. Her research interests cover Regional Economic Integration and MENA countries' relations with external partners (esp. EU Mediterranean Policy with a focus on trade, development, migration) besides Socio-Economic Development in the Arab world. Anja Zorob is author of Syria and the Euro-Mediterranean Relationship (Lynne Rienner, 2008, with Jörg Michael Dostal) and editor of Arabellions: Zur Vielfalt von Protest und Revolte im Nahen Osten und Nordafrika (Springer VS, 2013, with Annette Jünemann). Other publications include Oman Caught Between the GCC Customs Union and Bilateral Free Trade with the US (Springer 2013, ed. by S. Wippel) and Intraregional Economic Integration: The Cases of GAFTA and MAFTA (Ashgate 2008, ed. by C. Harders & M. Legrenzi).

Howard Loewen is Visiting Full Professor of Political Science at the University of Erlangen-Nürnberg and Senior Research Fellow at the Institute for Peace Research and Security Policy at the University of Hamburg. His main research interests focus on the international relations and the international political economy of East Asia. He is specifically interested in regional trade, financial and maritime security regimes, their interplay with global institutions, regional political cooperation (ASEAN, ASEAN+3, East Asia Summit), interregionalism (EU-East Asia, USA-East Asia) and change and continuity in political systems such as the Philippines, Indonesia, Malaysia and Singapore. Before joining the University of Erlangen-Nuremberg in 2013, Dr. Loewen served as Associate Professor of International Relations and Director of Research in the School of Politics, History and International Relations at the University of Nottingham Malaysia Campus. He is the author of Theorie und Empirie transregionaler Kooperation am Beispiel des Asia-Europe Meeting (Verlag Dr. Kovac 2003), Das politische System der Philippinen. Eine Einführung (Springer VS 2017), and Die Internationalen Beziehungen Südostasiens (Springer VS 2017).