Law, State and Inequality in Pakistan: Explaining the Rise of the Judiciary 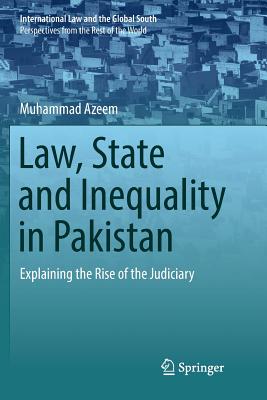 Through a detailed historical and empirical account of post-independence years, this book offers a new assessment of the role of the judiciary in Pakistani politics. Instead of seeing the judiciary as helpless or struggling against an authoritarian state, it argues that the judiciary has been a crucial link in the creation of state and political inequality in Pakistan. This rubs against the central role given to the judiciary in developing countries to fix the 'corrupt politicians and stubborn bureaucracies' in the World Bank's 'Good Governance' paradigm and rule of law initiatives. It also challenges the contemporary legal and judicial discourse that extols the virtues of Public Interest Litigation. While the book's core analysis is a critique of the contemporary liberal legal project, it also adds to the critical tradition of social theory by linking political economy to a social theory of law. The theoretical aspect of the study is applicable to any developing society whose judiciary is going through foreign-sponsored 'rule of law' judicial reforms.

Muhammad Azeem is assistant professor at Shaikh Ahmad Hassan School of Law, Lahore University of Management Sciences (LUMS), Lahore, Pakistan, where he teaches 'Labour Law, ' 'Critical Legal Theory, ' as well as 'International Law from the South: A Critical Perspective to Decolonize.' He has published multiple books on political economy in Urdu and was a political activist in subaltern sectors, particularly bonded labour, before becoming more theoretically engaged and writing about judicial activism in his Master of Laws (LLM) and PhD at the Osgoode Hall Law School, York University, Toronto.