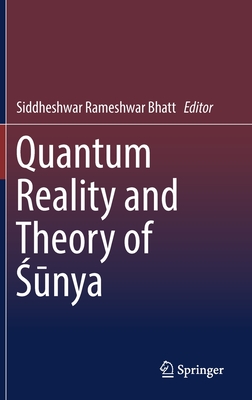 The book deals with expounding the nature of Reality as it is understood in contemporary times in Quantum Physics. It also explains the classical Indian theory of Śūnya in its diverse facets. Thereafter it undertakes comparison between the two which is an area of great topical interest. It is a cross-disciplinary study by erudite Indian and western scholars between traditional Indian knowledge system and contemporary researches in Physical sciences. It points out how the theory of 'Śūnyatā has many seminal ideas and theories in common with contemporary Quantum Physics. The learned authors have tried to dissolve the "mysteries" of Quantum Physics and resolved its "weird paradoxes" with the help of theory of Śūnyatā. The issue of non-separability or entanglement has been approached with the help of the Buddhist theory of Pratītyasamutpāda. The paradoxical situation of "wave-particle duality" has been explained with the help of Upaniṣadic theory of complementarity of the two opposites. The measurement problem represented by "Schrodinger's cat" has been dealt with by resorting to two forms of the calculation of probabilities. Some writers have argued for Śūnyatā-like non-essentialist position to understand quantum reality. To make sense of quantum theory some papers provide a happy symbiosis of technical understanding and personal meditative experience by drawing multifarious parallels. This book will be of interest to philosophically inclined physicists and philosophers with interest in quantum mechanics.

Professor Siddheshwar Rameshwar Bhatt is an eminent philosopher and Sanskritist. Presently, he is Chairman, Indian Council of Philosophical Research. He is also Chairman of Indian Philosophical Congress and Asian Congress of Philosophy. He retired as Professor and Head, Department of Philosophy, University of Delhi, Delhi. He is internationally known as an authority on ancient Indian culture, Buddhism, Jainism and Vedanta. His research areas include Indian philosophy, logic, epistemology, ethics, value-theory, philosophy of education, philosophy of religion, comparative religion, social and political thought, etc. He has lectured in many universities and research institutes of the United States, Canada, Finland, Trinidad, North Korea, South Korea, Japan, China, Vietnam, Sri Lanka, Singapore and Thailand. He is a member of many national and international associations. He is a Member of Board of Advisors of Council for Research in Values and Philosophy, Washington D.C., USA, which has brought out 300 volumes on world cultures and civilizations.