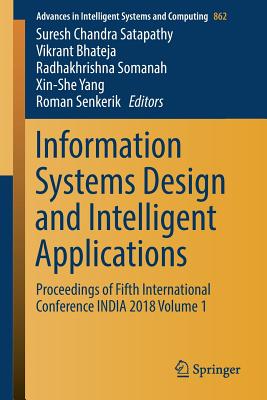 The book gathers a collection of high-quality peer-reviewed research papers presented at the International Conference on Information System Design and Intelligent Applications (INDIA 2018), which was held at the Universite des Mascareignes, Mauritius from July 19 to 21, 2018. It covers a wide range of topics in computer science and information technology, from image processing, database applications and data mining, to grid and cloud computing, bioinformatics and many more. The intelligent tools discussed, e.g. swarm intelligence, artificial intelligence, evolutionary algorithms, and bio-inspired algorithms, are currently being applied to solve challenging problems in various domains.

Suresh Chandra Satapathy is currently working as Professor, School of Computer Engg, KIIT Deemed to be University, Bhubaneswar, Odisha, India . He obtained his PhD in Computer Science Engineering from JNTUH, Hyderabad and Master degree in Computer Science and Engineering from National Institute of Technology (NIT), Rourkela, Odisha. He has more than 28 years of teaching and research experience. His research interest includes machine learning, data mining, swarm intelligence studies and their applications to engineering. He has more than 98 publications to his credit in various reputed international journals and conference proceedings. He has edited many volumes from Springer AISC, LNEE, SIST and LNCS in past and he is also the editorial board member in few international journals. He is a senior member of IEEE and Life Member of Computer Society of India.

Vikrant Bhateja is Associate Professor, Department of Electronics & Communication Engineering, Shri Ramswaroop Memorial Group of Professional Colleges (SRMGPC), Lucknow and also the Head (Academics & Quality Control) in the same college. His areas of research include digital image and video processing, computer vision, medical imaging, machine learning, pattern analysis and recognition. He has around 100 quality publications in various international journals and conference proceedings. Prof. Vikrant has been on TPC and chaired various sessions from the above domain in international conferences of IEEE and Springer. He has been the track chair and served in the core-technical/editorial teams for international conferences: FICTA 2014, CSI 2014, INDIA 2015, ICICT-2015 and ICTIS-2015 under Springer-ASIC Series and INDIACom-2015, ICACCI-2015 under IEEE. He is associate editor in International Journal of Synthetic Emotions (IJSE) and International Journal of Ambient Computing and Intelligence (IJACI) under IGI Global. He is also serving in the editorial board of International Journal of Image Mining (IJIM) and International Journal of Convergence Computing (IJConvC) under Inderscience Publishers. He has been editor of four published volumes with Springer (IC3T-2015, INDIA-2016, ICIC2-2016, ICDECT-2016) and few other are under press (FICTA-2016, IC3T-2016, ICMEET-2016).

Ramakrishna (Dinesh) Somanah is Director of Universite des Mascareignes. He is one of the three pioneers of professional astronomy in Mauritius (together with Dr Nalini Issur and Dr Kumar Golap who is now working for the VLA, NRAO). He is fully involved with the design, construction and research at the Mauritius Radio Telescope (MRT) project since 1989. MRT is one of the biggest scientific research projects at the University of Mauritius. The main aim of the project was to produce a map of the southern sky at 151.5 MHz (unique in the world), perform astrophysical interpretation of the map, develop new algorithms and software etc. He has been involved with the supervision of the civil, mechanical, electrical and electronics work. Because of its immensity, it took nearly 5 years (1989-1993) to build. He was also part of the team which developed the software to convert the raw data into deconvolved radio images, and astrophysical interpretation of the latter. He has many publications in reputed journals.

Xin-She Yang obtained his DPhil in Applied Mathematics from the University of Oxford. He then worked at Cambridge University and National Physical Laboratory (UK) as a Senior Research Scientist. Now he is Reader in Modelling and Optimization at Middlesex University, an elected Bye-Fellow at Cambridge University and Adjunct Professor at Reykjavik University (Iceland). He is the chair of the IEEE CIS Task Force on Business Intelligence and Knowledge Management. He is on the list of both 2016 and 2017 Clarivate Analytics/Thomson Reuters Highly Cited Researchers.

Roman Senkerik was born in the Czech Republic, and went to the Tomas Bata University in Zlin, Faculty of Applied Informatics, where he studied Technical Cybernetics and obtained his MSc degree in 2004, PhD degree in 2008 (Technical Cybernetics) and Assoc. Prof. degree in 2013 (VSB - Technical University of Ostrava - degree in Informatics). He is now a researcher and lecturer at the same university. His research interests are: Evolutionary Computation, Theory of chaos, Complex systems, Soft-computing methods and their interdisciplinary applications, Optimization, Neural Networks, Data analysis, Information retrieval, and Cyber-security. He is Recognized Reviewer for many Elsevier journals as well as many other leading journals in computer science/computational intelligence. He was a part of the organizing teams for several conferences, and special sessions/symposiums at IEEE CEC and IEEE SSCI events. He was a guest editor of several special issues in journals, editor of Springer proceedings for several conferences.